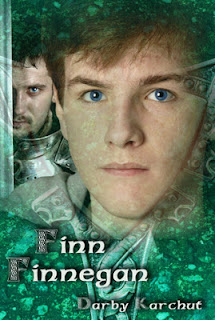 Finn (not bleedin' Finnegan) MacCullen is eager to begin his apprenticeship. He soon discovers the ups and downs of hunting monsters in a suburban neighborhood under the demanding tutelage of the Knight, Gideon Lir. Both master and apprentice are descendents of the Tuatha De Danaan, a magical race of warriors from Ireland. Scattered long ago to the four corners of the world, the De Danaan wage a two thousand year old clandestine battle with their ancient enemy, the Amandán, a breed of goblin-like creatures.

Now with the beasts concentrating their attacks on Finn, he and his master must race to locate the lost Spear of the Tuatha De Danaan, the only weapon that can destroy the Amandán, all the while hiding his true identity from his new friends, Rafe and Savannah, twins whose South African roots may hold a key to Finn's survival. Armed with a bronze dagger, some ancient Celtic magic, and a hair-trigger temper, Finn is about to show his enemies the true meaning of "fighting Irish."

“I dinna write the rules. It clearly states in the ‘How to Train Yer Apprentice’ manual that the apprentice does the laundry.”


The fact that Finn Finnegan is an immensely enjoyable read was obvious simply from reading the first few chapters. One of my favourite things about this novel is the easy-going banter between master and apprentice.

Finn Finnegan decides to take it upon himself to start his apprenticeship slightly early and when Knight Gideon Lir agrees to take him on despite unforeseen circumstances, he has no idea exactly what he's getting himself into. With a temper to match Gideon's, Finn is seriously lacking in manners and restraint.
Training to fight the Amandan, ancient goblin-like foe of the Tuatha De Denaan, Finn is learning new things everyday and trying to make friendships too, but it soon becomes abundantly clear that the Amandan are high in number and becoming an evermore deadly threat.

This book is genuinely surprising in the best way possible. The characters were really compelling in their stubbornness and tempers and their witty dialogue.

Set in modern day, Finn Finnegan is a mix of following ancient traditions while using modern day technology. There are such realistic everyday life things as well as
awesome action-packed fighting sequences. Well rounded characters who each brings piecces of their own story and draw you in to the novel, make this book so incredibly enjoyable.

The plot is so well thought out, there is never a single lulling moment or any kind of hole in the plot, with surprising twists it is so difficult to attempt to guess the ending. This is by no means a difficult read but the story line challenges you to figure out what exactly is going on, you begin to need to know, to need to keep reading till the end!

Purely and simply a fantastic read, I can't wait for book two in The Adventures of Finn MacCullen series!