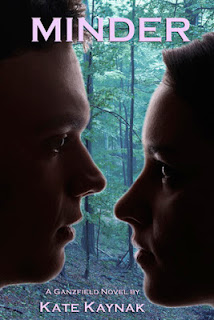 
I know what you're thinking.
Sixteen-year-old Maddie Dunn is special, but she needs to figure out how to use her new abilities before somebody else gets hurt. Ganzfield is a secret training facility full of people like her, but it's not exactly a nurturing place.
Every social interaction carries the threat of mind-control.
A stray thought can burn a building to the ground.
And people's nightmares don't always stay in their own heads.
But it's still better than New Jersey--especially once she meets the man of her dreams...


Ok, so when I heard that I would be receiving my ARC's for the blog, I was SO excited, and when I heard that one of them was Minder, I was ecstatic! The description is incredibly enticing, I don't know what my expectations for this book were, but whatever they were, they were blown so far out of this world. I loved reading Minder!
Minder starts with the main character, Maddie, getting attacked, and it's only through a strange miracle that she gets away mostly unscathed. Maddie has an ability and following the attack, there are strangers that come for her and convince her to go with them to a place called Ganzfield.
Ganzfield is a safe place for people like Maddie, people with paranormal abilities. Abilities range from telekinesis to pyrokinesis, and almost everyone has the potential to be a danger. Maddie quickly learns how to use her new ability and everything at Ganzfield gets so much better when Maddie meets a guy like no other...


Minder is the perfect kind of book for being the first in a series, amazingly paced, there are absolutely no boring parts, there's not even a disinteresting sentence. And, seriously, Minder has got to be the cutest book I have ever read.


Maddie is an awesome main character, she actually gets affected by the things that happen to her, which helps make the story a lot more realistic in terms of cause and effect. Maddie is strong, she knows what is right and wrong, and she will stand up to those who abuse their power.
Drew is a funny character, he is mostly light-hearted and he is always ready for action. Trevor is absolutely, adorably cute and sweet, seriously, he is the kind of guy that can do no wrong, he is one of the most incorruptable characters that I have ever read.


The plot moves forward at a steady pace, it's easy to follow what is happening and you can just enjoy every minute. World building is a key theme in this novel, you get to know the characters very well, not all of them are exactly what they seem at first which is brilliant and the setting of Ganzfield is well developed and intriguing.


Action is not quite a main theme in Minder, but there is more than enough to keep you on the edge of your seat during those chapters, your heart races with the characters and there are revelations that will leave you completely breathless to turn the next page as fast as you can as you just have to know what happens next. I breazed through Minder, loving it so, so much and my only thought are that I need book two right now.
I. NEED. ADVERSARY. NOW! :)
"What's a charm?" I asked him.
His face reflected the tumbling emotions of his thoughts. All of his emotions for my well-being were forgotten as he jerked back from me. Crap! Not a charm. Minder! Did I have any sex thoughts about her? Don't have any now!
"Just that I need a bigger rack."