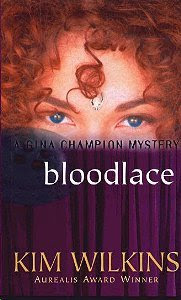 
Gina Champion is a 16-year-old detective....a psychic detective. Gina was quite young when she discovered a talent for knowing the history of an object when she held it, which is known as psychometry. Since then, she has honed her skills considerably.
Gina′s best friend, Vanessa, has landed a part in a play....the local theatre is to reopen after having been closed down for years. Rehearsals do not go well...the leading lady leaves when she sees pools of blood that disappear. Vanessa is promoted and Gina is persuaded to join, which she takes as an opportunity to explore the theatre and do some research at the library. The ghost certainly seems to have no intention of going away...Gina discovers that the theatre originally closed down because a young girl ran through the audience one night, bleeding profusely.
As Gina follows the trail she realises that someone is trying to put her off. Is it Park Reeves, the creep who is making a play for Gina, when it is Vanessa who has a crush on him, or is it the pastor and his cronies, who have been trying to close this ′immoral′ play down. Gina gets threatening phone calls and also sees that someone is watching her house. Gina has some answers but needs to get into a secret, hidden section of the theatre, which she discovered on the building plans.


Bloodlace is a thrilling novel that has a plot and characters that will stick with you long after you have read it. I should know, I first read it in 2009.
Gina is a great character, she is strong, brave and has a curious streak a mile wide, she just loves to uncover mysteries to find the truth. Gina happens to be a psychis, she can know the history of any object she touches.
Gina's best friend, Vanessa, joins the local theatre company and when the female lead runs out on the play after seeing things, Gina decides to tag along with Vanessa and check things out. Gina sees the ghost of a girl, and this ghost is determined to stick around.
Gina soon learns that this girl is probably the reason why the theatre was closed down, as a girl was seen running through the audience, blood streaming from her. Who is this girl and what happened to her? Gina is trying her best to find out. But there is someone who doesn't want the truth to be discovered.


Thrilling mystery, brilliantly written characters and a captivating plot, this story has almost everything, there is history, danger, a ghost and psychis ability. It's so easy to visualise the characters and the story, it's nice and haunting, with a tragic undertone.
A great story, Bloodlace is the first in an amazing series by a great author. I recommend this series to people who love mysteries, psychics, thrillers or anything that is just a bit different.