THE FIRST THIRD by Will Kostakis 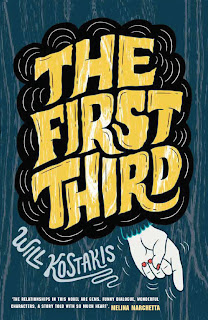 Life is made up of three parts: in the first third, you're embarrassed by your family; in the second, you make a family of your own; and in the end, you just embarrass the family you've made.

That's how Billy's grandmother explains it, anyway. She's given him her bucket list (cue embarrassment), and now, it's his job to glue their family back together.

No pressure or anything.

Fixing his family's not going to be easy and Billy's not ready for change. But as he soon discovers, the first third has to end some time. And then what?

It's a Greek tragedy waiting to happen?

The First Third is a heartfelt, deep novel that follows Billy and his family through the tough times that follow his Greek Yiayia (grandmother) being temporarily hospitalised.

Dysfunctional doesn't even begin to describe what his family is beginning to be, with his mother just beginning to date again after many years and being a little more than rough at it. His gay older brother, Simon, living in Brisbane, having an awesome time and his younger brother, Peter, rapidly drifting away from everyone in a tide of angst and misunderstanding.

After visiting his Yiayia she decides to give him a goal, her bucket-list in case she doesn't make it. With the help of his best friend Lucas, otherwise known as Sticks due to his physical condition, they start on fulfilling the not so easy list:

"1) Find your mummy a husband

2) Have Simon girlfriend in Sydney

Along the way both Billy and Lucas find new people in their lives, themselves and their families once more.


This is a novel that I found to be easy to read, I found Billy easy to relate to, I also loved his sense of humour and the relationships that grew over the course of The First Third. The characters each had likable qualities about them and their flaws and mannerisms had me in stitches at times due to me being able to relate them to people that I know personally.

The characters and vocabulary used by them was very Australian as well as the sense of humour and light-heartedness towards most things. It was an aspect of the novel that I especially liked and I think that not enough Australian authors use this writing style.

The way that Kostakis brings the story line together was interesting and the story was creative and certainly kept me interested in the plot. Although, in the middle there wasn't much of a climax or point of excitement, instead I found it to lag a bit and keep a much slower pace. I still really enjoyed these parts, don't get me wrong, I just think that he could have done the middle section in a different way.

Towards the end however, it hit that climactic point and had me gripped in such a way that I was really loathed to put it down for a few minutes because I felt that I had to keep reading.

The ending to the story was really unexpected for me and I felt that it was really well written as well as being surprising. At the same time it was quite a flat mood just prior to the end of The First Third but I am really glad that it ended the way that it did, it was the perfect ending to a great rollercoaster ride of emotions and family connections.

"I was fourteen when my grandmother taught me about love and the difference between moussaka and lasagne.
I was fifteen when I fell in love with lasagne.
I was sixteen when I met moussaka.
And I was seventeen when I realised it didn’t matter. Lasagne or moussaka, being on the other side of love hurt."