Okay so first thing's first, I am quite a large  The Mortal Instruments (TMI) fan, although I won't claim to be crazy about the series, because I was late to the party, as they often say.
I actually did not end up reading City of Bones until a decent amount of time (a month or two) had passed since the craze where everyone was reading it.
I think that Cassandra Clare is a wonderful and talented woman to have brought us such vivid, strong and amazing characters. I honestly cannot thank her enough for having written TMI and even more so, for bringing Jace to us all! ﻿﻿

So, when I heard that they would be making City of Bones into a movie I could not contain my excitement, it was an amazing feeling of pure elation. Although sadly, it was soon replaced with a sense of fear and dread, fuelled by the conern of the director, casting officials etc. stuffing it up. It was most definately a valid concern once some of the casting choices were announced, so much so that I was on the verge of refusing to see it once it was revealed to me that none other than Jamie Campbell- Bower was to be playing the ever gorgeous Jace!

To me this was a train- wreck waiting to happen, my ideal actor to play Jace would have been Alex Pettyfer hands down. He has the body (view novel cover design for proof), the jawline (again view cover) and even better matching hair than Campbell- Bower! I have only seen Bower in the Twilight movies and Harry Potter and the Deathly Hallows Part 2  but I really could not see him playing Jace of all people!! I was dead set certain that if I saw City of Bones with him as the lead that I would never be able to read any TMI novels ever again due to him butchering the character forever.
﻿

I am deeply sorry to any fans of Jamie Campbell- Bower and to Bower himself for the thoughts that whizzed frantically around my brain in the lead up to the release of the trailer and even for my thoughts after viewing the trailer. I found the trailer to not repsesent the movie's good points much at all after seeing it. I thought that it was dry and badly thought out and that it really did the actors no favours at all regarding the representation of their characters. I was whole- heartedly disappointed in the film company and in Ms Clare for letting her fans down (well mostly me, but I'm allowed to be selfish sometimes) in regards to her movie and ready to just give up altogether when on the release day my co-blogger went to see it herself and loved it!


A few days later I agreed to go and see it, mind you I was still incredibly dubious (and ready to walk out if it was too horrible) about the film. As City of Bones began my concerns were still there, but as it progressed I found myself really warming up to Campbell- Bower and I found that the chemistry seen between Jace and Clary was superbly executed. It wasn't done in a silly way, but one that I felt to be real and believable instead.
By the time that the credits were rolling I was regretting my past thoughts on the directors and everyone's choices, I now think that everyone did a wonderful job in making City of Bones and I now cannot wait for TMI #2 City of Ashes! Cannot wait! 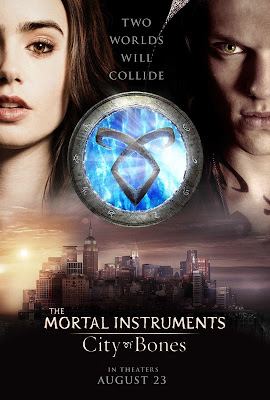