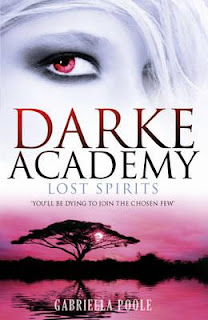 
A new term, a new location for the Darke Academy - and everything is different for Cassie Bell.

The beauty of the turquoise Kenyan sea can't make up for the loss of her soulmate, Ranjit.
He's on the run, and Cassie will do anything to find him.
But when the evil Katerina and her mother appear, more powerful than ever, Cassie has to make a crucial decision.

And her love for Ranjit might just be her ultimate weakness ...


Lost Spirits is definately one of my favourite Dark Academy novels by far. In this last novel it keeps the storyline flowing in a way that doesn't seem as though Poole is trying too hard to keep the Darke Academy series going.

Lost Spirits continues to follow Cassie and her best friend Isabella through the trials and hardships of attending a school of prestigious, soul feeding students.
Since the end of the last term Cassie has been trying to cheer Isabella up since her adoring boyfriend Jake was murdered by Cassie's boyfriend at the time, Ranjit Singh.

Since that occasion, Ranjit has disappeared and Cassie is preoccupied wondering where he could be. When Isabella decides to leave the academy Darke decides to take a leap of faith and make a revalation that will permanently alter all ther lives.


I found that the way in which Poole intertwined the character relationships and personalities was creative and well executed. I  overly enjoyed the plot twists that occured and the ways in which the characters grew in themselves and how even they changed over the course of the Darke Academy novels.

There are certainly some characters which I hate with a passion and others which have been developed well and I absoloutely adore! For me this demonstrates the lengths to which the novel has been thought out and how passionate the author is about the world that she has created. The ending wasn't what I expected when I began Lost Spirits but I thought it was a superb way to end this series that I adore!