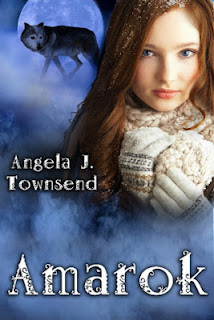 
Life has been hell for seventeen-year-old Emma since she moved from sunny California to a remote Alaskan town. Rejected by her father and living with the guilt of causing her mother's death, she makes a desperate dash for freedom from her abusive stepfather. But when her car skids off the icy road, her escape only leads to further captivity in a world beyond her imagining.

Dragged across the tundra by a crazed mountain man and his enormous black wolf, she finds that her gentle touch and kind heart earn her the wolf's friendship, and she names him Amarok, not knowing he was once a young man.

When a vicious madman--trapped in bear form by an ancient Shaman--attacks the travelers and injures Amarok, Emma must find the strength to confront her fears and free the wolf she's come to love. But there's a catch--she must face down the evil shaman, a powerful Siberian mammoth hunter from the ice age, and he has no intention of giving up his power to her.

Emma is running, back to sun-soaked Calfornia, the place she lived before entering hell. Moving to Alaska was Emma's own personal hell, especially after her mother's death, which Emma blames herself for. Emma hasn't gotten far before her car crashes off the road, and she's dragged across the terrain by a cruel, crazy man who lives in the mountains.
Everything would be bleak for Emma if it wasn't for the mountain man's wolf companion. He and Emma form a special bond and she names him Amarok. Amarok is not all that he seems, he was a human teenager, but that was before an evil ice-age Shaman transformed him. She learns the truth when she is attacked by a bruin -another victim of the Shaman, this one turned into a bear- and Amarok is gravely injured while saving her.
Now Emma must trek to cursed land to find the totem that that will save Amarok's life, but the Shaman isn't going to give up his control easily.
Such a turbulent, fascinating read, Amarok surprised me in its prose and in how much of an emotional struggle the characters went through. The myths and descriptions of the landscape are amazing, I found this story really easy to visualise. Though the plot did drag along for most of the first half of the book, the second half improved a lot.
It did take me a while to really immerse myself in the story, to begin with, Emma was difficult to get into as a character but the further I got into the story, the more she grew and developed into someone stronger. I fully started enjoying the story near the halfway mark, from then on Amarok had my undivided attention.
The dual perspective really added to the story, letting you know some information before one of the other characters knows, or leaving you in the dark until you read that charcters perspective again.
I loved reading Amarok's view point.
The ending was fairly abrupt, but it still worked well. Though Amarok was left mostly open ended, the intentions expressed were sweet and I enjoyed it.

I rate Amarok  either Three and a Half or Four out of Five! (can't really decide which)