Are you a fan of the Denazen series? A huge fan perhaps? Or a new fan? Or maybe you're just about to pick up Touch for the first time?
Well, whatever the case, I recommend joining Six Underground, the Official Denazen series Fan Group! I've joined! 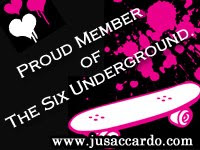 The sign-up page is here!
Also, have you heard? Jus Accardo has a contest running, an incredibly awesome contest... but it's only open to members of Six Underground (just another great reason to join!).
Over the next few weeks I will be posting quite a bit about the Denazen series, so keep an eye out :)
The details of the competition can be found here!