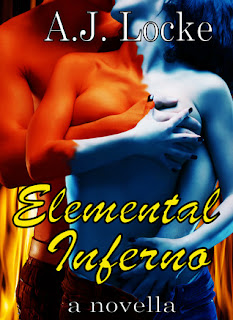 
Rielle is a Winter Aura who for the past hundred years has held the job of controlling winter weather in her assigned area. During the non-winter months she can live as she pleases, as long as she doesn’t do anything that would make her lose control of herself, which could unleash her power and have it snowing in July. Therefore, sex outside of winter is a big no-no, because what could make her lose control of herself more?
If Rielle is unable to keep her winter magic dormant during her off seasons, she will be forced to Sleep by the Aura Elders.


For Auras, it’s a fate worse than death.
When the Summer Aura for her area winds up mysteriously dead, summer weather spirals out of control until another Summer Aura arrives in the nick of time and brings things back to order. Aden is as gorgeous and alluring as they come, and before Rielle knows it, she finds herself with a roommate at the urging of the Elders, who seem uneasy about Aden, and want an eye kept on him.


Rielle and Aden have a magnetic attraction to each other, and for the first time Rielle is afraid of losing control. However, Aden is much more than he seems, and when he shows Rielle a way to indulge their passions without repercussions, it seems too good to be true.
But Aden’s secrets are ones the Elders fear, and can’t ignore.
As they close in on him with deadly force in mind, Rielle will have to decide if Aden is in fact too dangerous, or if it’s worth going up against the Elders to save the man she’s losing her body, and heart to.

Elemental Inferno sounded sexy and intriguing when I read the description, and that much is most definitely true.

Elemental Inferno focuses on Rielle, a Winter Aura - a being who controls the temperature and weather pattern during her designated season, but who must remain completely in control during her off-season which is three quarters of the year. Keeping control means no sex, which was difficult enough to manage before she met Aden...

Summer temperatures rise to insane heights when the Summer Aura suddenly dies, but there is a quick and surprising replacement when Aden shows up. But the Elders don't seem to trust him which results in Rielle gaining him as a roommate for a while, a very, very tempting roommate. Things however, are conspiring against the both of them, with the Elders wanting to take action against Aden for reasons only they and he know...

Rielle is a straight forward character who is bluntly honest and is determined to be grateful for the life she has been given as an Aura - despite its many rules, she would, however, love to be able to indulge during her off-season, but never has due to her fear of losing control.
Rielle is very fearful of losing control and being put to Sleep. It is a lot easier to understand Rielle, at least I found, after learning her back story.

Aden (no pun intended) is smolderingly hot, he is also mysterious due to the pull he seems to have over people and the secrets he keeps. He is sweet and flirty, and instantly has Rielle on edge for the way he makes her feel.
The interactions between Rielle and Aden are at first mistrustful (Rielle knows there is something more about Aden) but soon turn flirty and scorchingly sexy.

For a novella, Elemental Inferno does well to fit in a story that includes characters' back stories, a well thought out plot that makes sense and will fascinate reader, but also builds a world that interest and sometimes enchants as it is depicted in an easy to visualise way.


I rate Elemental Inferno Four out of Five!!!

ABOUT THE AUTHOR
A.J. Locke is a writer of Urban Fantasy, as well as an avid reader. She loves reading both YA and adult novels, and also enjoys post-modern Japanese fiction. A.J. is also an artist, and enjoys drawing, painting, and graphic design. Affairs of the Dead is her debut novel and is available now from Etopia Press.
iqurae.blogspot.com | twitter.com/maqueripe