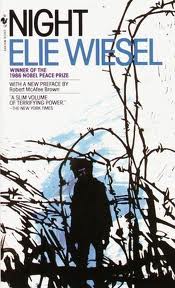 Penetrating and powerful, as personal as The Diary Of Anne Frank, Night awakens the shocking memory of evil at its absolute and carries with it the unforgettable message that this horror must never be allowed to happen again.

Elie and his family live in a small town, Sighet, and when they are told to wear a yellow star on their clothing, Elie questions the motives while his father says that it's just a star and isn't important. As the war progresses the Nazi's move closer and Elie and his family, who are still oblivious to what's happening around them, are forced to move out of their home. Elie and his father are split up from his mother and sisters in Auschwitz and are only saved because they lied about their ages. They are put to work, fed next to nothing, beaten and treated appallingly. Elie is forced to grow up quickly and learn to look after himself and his father as well as how to adapt.
For me Night was a good book for a quick, brief look into peoples experiences during the Holocaust. I felt that I didn't connect to the characters or the situation the way that I have in other war books of this time(Diary Of Anne Frank/Elie etc.) and felt that the plot was too shallow and two dimensional for my liking. The book didn't engross me and I thought that it was a mercy that it was so short, so that I didn't have a wade through more pages. The ending was messy and by this time I was uninterested and waiting desperately for the end. It was a good book because of the number of pages and the slightly different style of writing and plot. I also enjoyed the reality of this novel and you tell that it was written by someone with at least some amount of personal experience regarding this setting/theme. If you like this genre of book then certainly check it out, because it's another take/point of view on what happened and what many victims went through during their time as prisoners. It wasn't torturous to read but I wouldn't read it again.

“I told him that I did not believe that they could burn people in our age, that humanity would never tolerate it . . .”