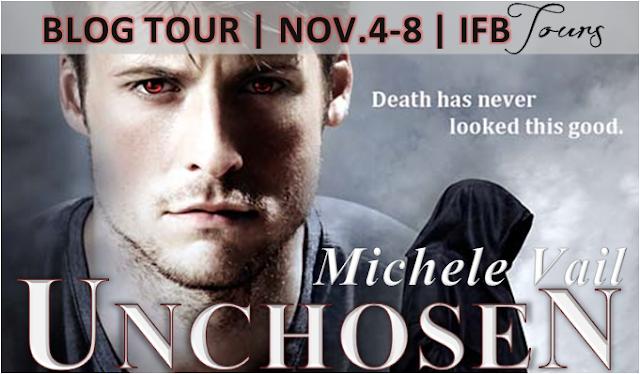 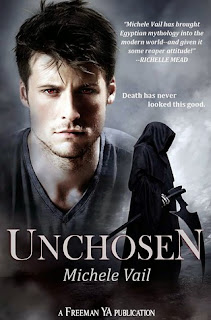 
I thought the worst of my reaper training was behind me… turns out I was wrong. Dead wrong.

Molly Bartolucci has done a lot of growing up but after being accused of using illegal magic at her school for necromancers, reaper-in-training Molly is treading lightly. As the destined leader of Anubis’s Chosen, she needs to study hard, train harder, and stay out of trouble.

It doesn’t help that she’s feeling more than academic about her melt-your-bones hot reaping instructor, Rath. And if her relationship drama isn’t enough to drive her over the edge, she has to deal with mother issues, nosy little sisters, suspicious friends, and an unnamed force stalking her at school.

Then her family is attacked, and her bio-dad ends up comatose in the hospital. Now, Molly has to uncover who’s trying to hurt her loved ones—and all without the help of Anubis

Keep calm... and carry your scythe.


Unchosen starts really well and I immediately enjoyed it more than Undeadly.
I absolutely LOVE the snark and sarcasm contained in the pages of Unchosen!

Beginning where Undeadly ended, Molly has a lot to deal with, but once again, fate doesn't care at all about that. Molly has to train, study and work her way tofinding more answers, but life keeps getting more and more complicated.

Molly starts to feel very differently about her instructor Rath, seeing him as something... other... more than an instructor. Her family is also on the line, suffering an attack that leaves her dad in hospital, all the whilst keeping secrets from her friend (since it's part of her reaper job description) who soon become suspicious.

Molly has to fight, for her loved ones, for answers and for the world, however, this time Anubis can't be contacted...

Once again, Molly's narration is interspersed with entries into her reaper diary.
Molly's character has improved so much from how she was in Undeadly and has really come into her own, as a realistic (emotionally and by way of her reactions), strong and awesomely kick-ass character.

Rath plays more of a role in Unchosen and there is definitely more chemistry between the two - it's palpable through the pages. Rath is sexy, mysterious and sweet.
Henry is such a sweety, I love the formally informal interactions between Molly and her ghoul. And Ally, as well as some of Molly's Nekyia friends, plays bigger roles too.

Definitely action-packed, Unchosen hooks you from the very first, being addictive to read - you have to know what happens.


The writing style is amazing and all throughout the novel there is mystery, intrigue and revelations. You get to know more about the gods and there is a pop-in from a character you may not have expected to see again. Michele Vail keeps you on your toes and constantly wanting more of the characters.

Totally un-put-downable, it's going to be very difficult to wait for book three to be released!


"Will there be anything else?"

I rate Unchosen Five out of Five!! 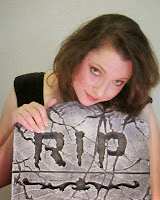 ABOUT THE AUTHOR
Michele Vail is the author of The Reaper Diaries, a young adult paranormal series set in the modern world with a zombie twist. The stories center on 16-year-old Molly Bartolucci, a reaper-in-training who's learning to deal with love, destiny, and death.
Michele Vail is the pen name of national bestselling paranormal romance author Michele Bardsley (who also writes thriller mysteries under Michele Freeman). The Reaper Diaries consist of three books: Undeadly, Unchosen, and Unbroken.