Upper Young Adult Review: THE ROAD TO YOU by Marilyn Brant 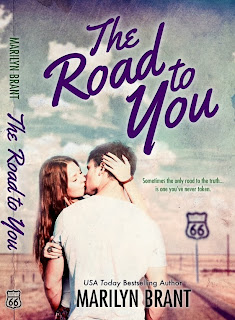 Sometimes the only road to the truth...is one you’ve never taken.

Until I found Gideon’s journal in the tool shed — locked in the cedar box where I’d once hidden my old diary — I’d been led to believe my brother was dead. But the contents of his journal changed all that.

The Road to Discovery...
Two years ago, Aurora Gray’s world turned upside down when her big brother Gideon and his best friend Jeremy disappeared. Now, during the summer of her 18th birthday, she unexpectedly finds her brother’s journal and sees that it’s been written in again. Recently. By him.

The Road to Danger...
There are secret messages coded within the journal’s pages. Aurora, who’s unusually perceptive and a natural puzzle solver, is hell bent on following where they lead, no matter what the cost. She confides in the only person she feels can help her interpret the clues: Donovan McCafferty, Jeremy’s older brother and a guy she’s always been drawn to — even against her better judgment.

The Road to You...
Reluctantly, Donovan agrees to go with her and, together, they set out on a road trip of discovery and danger, hoping to find their lost brothers and the answers to questions they’ve never dared to ask aloud.

In that expectant space between silence and melody, our trip began...


The Road to You sounded way too mysterious not to read, and I'm glad I picked it up!

Set in the 1970's Aurora Gray was just going about coping with day to day life, same as she had for the past two years since her brother Gideon had disappeared, until she came across Gideon's journal... and found that it had been written in recently.

Needing answers about what happened to her brother, Aurora uses whatever clue she can find in the journal to find a starting place to search for answers. Only one other person feels the same way she does - Donovan McCafferty. Donovan's brother Jeremy disappeared at the same time as Gideon, the two were best friends.

Donovan decides to come along on the road trip for answers...
Answers that may be nothing like they ever expected...

Aurora's character was interesting from the very beginning, she incredibly intuitive and extremely perceptive, her insight into the way people feel and think was continually intriguing.

Donovan has a lot of anger, however he also really knows how to turn on he charm. The Road to You is told from Aurora's point of view, with her sometimes reminiscing, her memory's give us a sense of the other characters and lay out a history, which worked to show how and why things are the way they are in her present.

Donovan's character was really difficult to read, even with Aurora's insights, he was still a mystery. Donovan's and Aurora's differing approaches to pulling answers from people were fascinating to read.

As the two journeyed in search of answers, it was awesome to see how different aspects of the story lined up, while seeming to give some answers, more questions are opened p the more you read, leaving your eyes stuck to the page (or in my case, the computer screen) as you feel the need to know what happened. Some answers make you question the characters

The 1970's backdrop to the story was very well-written and easily believable, whilst immersive.