LOATHING LOLA by Will Kostakis 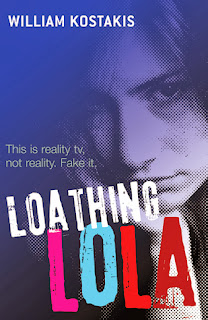 Fifteen-year-old Courtney Marlow didn't exactly think it through. She thought the offer to have her life broadcast on national television was the perfect solution to her family's financial troubles.

Mackenzie Dahl, the show’s producer, promised to show Australia a real teenager. Courtney was going to be a positive role model, someone on television without a boob job and an eating disorder.

Soon, everyone wants their 15 minutes of fame via a little bit of Courtney – especially her conniving friend Katie, and her stepmother, Lola. And Courtney is just beginning to realise that ‘ordinary’ does not translate to ‘entertaining’…

Courtney Marlow is facing a tough year, being seen as 'the girl with the dead boyfriend' by the whole school she has trouble keeping herself together. She faces school, as well as auditioning for a reality TV show like her boyfriend would have wanted her too... this makes her life a hell of a lot more complicated and Courtney doesn't know who to trust.

This new reality TV show reveals the gaps in Courtneys life and pulls her world apart in ways that she never imagined would happen. Leaving her alone and powerless to a large, influencial company Courtney has no choice but to fight her way out. By any means possible.

Loathing Lola was a funny, intriguing and truely captivating novel which had me from the opening chapter.

The realistic style that the characters were written in is a feature common to Will Kotakis' writing style. His characters are detailed to a good degree but not described to the point where nothing is left to the readers imagination.
Even the character developments are cleverly portrayed and executed, with the relationships and friendships developing at a realistic rate.
The friendships weren't just portrayed as happy with no issues, they actually reflected the complications and rollercoaster pathway that most friendships have, especially in times of great hardship.
The relationships between characters displayed the highs and lows of friendship and that some friendships can remain strong no matter what happens and that a little trust can go a long way.

With twists and turns at every corner Loathing Lola kept me guessing and on the edge of my seat for most of the duration of the novel,- as soon as I thought that I had the ending figured out, something new would happen and turn my perceptions on their head once more.


Surprisingly I enjoyed this book even more than the other Will Kostakis novel I have read, The First Third, it was everything I expected it to be and more.
I simply cannot wait to read more by Will!


I rate Loathing Lola Four out of Five!!!