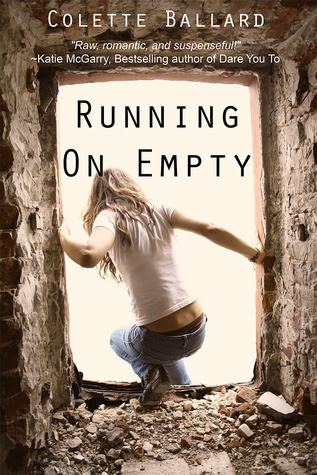 Running On Empty
by Colette Ballard

Description:
What does it feel like when you die—in those final moments? Do you feel the physical pain, or just the pain of your regrets? What does it feel like when you realize you can’t answer these questions because you’re not the victim?You’re the killer.River Daniels lives an ordinary life as a high school junior growing up in the confines of rural Texas until her boyfriend’s brutal attack leaves her both a murderer and a fugitive.

When River’s closest girlfriends come to her aid, they make a hasty decision to not only help her, but leave their own troubled lives behind and join in her escape. The girls manage to elude police for months, but with every near-miss, River’s life spirals further out of control, until she finally hits rock bottom. Realizing she must stop endangering her friends and find evidence proving she acted in self-defense, the girls decide to make a risky move.

River must face her ugly past and the one person she was protecting the night her world caved in, the guy she has loved for as long as she can remember.

Did you know the story-line for Running On Empty from day one, or did you come up with it as you came along?

As cliché as this sounds…I had a dream (not the Martin Luther King Jr. kind.) Nope, the kind that was so vivid I couldn’t stop thinking about it. Teenage girls were on the run and it was so intense and upsetting, I had to know what they were running from. The main character killing her boyfriend is what my demented brain came up with.
I spent several years daydreaming and writing this story in my head until I finally decided to go for it. It took a couple years, mistakes, drafts, and a number of inner tantrums before it ever resembled an actual novel.


What trait dis you feel was most important to write into River's character?
She’s tough and stubborn due to life experiences, but she’s also kind, caring, and loyal.

Which character was your favourite to write?

What is your favourite novel, and why does it appeal to you?

Easy: The Outsiders. I loved this book as a teen because of its honesty; these were the kids with the tough breaks who were incredibly, heartbreakingly real. The “voices” of these characters were distinct and raw, and simply amazing. My original paperback still sits on my shelf for inspiration, and I often pick it up and start reading anywhere.

Do you have any writing habits or quirks?

I often write out of sequence. I write what comes to me before I lose it, or if I get stuck on something, I just skip to what I “see”. When I try to force it, it usually leads to failure. It would probably be much easier if I wrote in order, but my brain doesn’t do easy very well.


What kind of research did you do whilst writing Running On Empty?

I did a lot of research about the legal system—thanks to an amazing friend. She also took me on an amazing behind-the-scenes field trip involving lawyers, metal bars, and the color orange.

What was the most difficult part of Running On Empty for you to write?

Besides the tons of drafts, I would say finding the right balance between River and her boyfriend. He was very manipulative, and she was naïve and looking for an escape from her world.


How does it feel knowing you book will be released into the world?