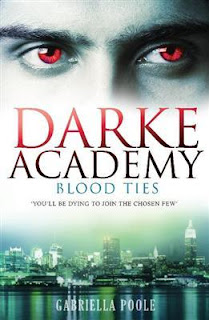 
Suspense builds in the second tale of the Darke Academy, where true graduates take life by the throatThis term the secretive Darke Academy has moved to New York, and Cassie Bell is no longer the innocent new girl.

Now she is strong, determined, and hiding secrets of her own.
Cassie has been introduced to the world of the Few and is struggling to come to terms with her astonishing powers, a dangerous romance, and the malevolent spirit inside her, demanding to be fed.

"Get your Jimmy Choos on, you mean," remarked Cassie under her breath, but she felt a thrill of glamour as she slipped into the gorgeous stilettos. "Am I going to be able to walk?"
"In these shoes you do not walk, Cassie, you stalk.”


Blood Ties further explores the hidden world of the dark and mysterious occurrences at the Darke Academy.
It continues to follow Cassie Bell as she learns to live with being one of The Few, a very select group of students who have been given beauty, power and someone else's soul in their body.
Cassie is now trapped with Estelle, an old, strong and respected soul in her mind as well, this is no easy feat to deal with when Estelle interrupts her innermost thoughts and contributes her outspoken opinion to most things.
As Cassie's friendships grow ever stronger with her classmates, especially Isabella, Ranjit and Richard, she begins to get a better view on her life and she begins to get it back on track. With Isabella by her side and the drop dead gorgeous Ranjit as her boyfriend Cassie feels as though she can take on the world.
That is, until things take a dramatic twist for the worse and the tables turn on them, then Cassie finds herself torn between love, friends and self preservation.

Blood Ties was a great sequel to Secret Lives, it followed on really well from where it left off and kept up the momentum to keep your blood pumping.
The characters continue to develop, diverting slightly from their stock character persona's and becoming more realistic and relate-able.
I would love to be able to say that the language becomes more sophisticated and that a wider vernacular is used but alas, sadly it is not the case and it tends to remain mostly at the same level.
Although the plot line certainly does thicken and intensify, it is sadly quite predictable at times but still maintains some mystery and curiosity for readers.
The next book should be just as good and this series seems to only be getting better, so cannot wait to get my hands on Divided Souls.

“For this lowlife to remain at the Academy while I was expelled is simply...oh dear, how shall we put it?"
"A crime," murmured Sara.
"That's kind, dear Sara, but crime can be fun and sophisticated." Katerina gave a thin-lipped smile as the other three girls chuckled. ."