THE MARK OF ATHENA by Rick Riordan 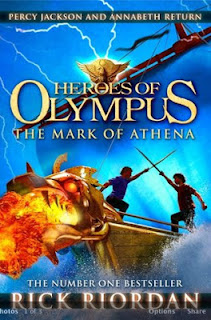 ONE FATAL PROPHECY.
SEVEN BRAVE DEMIGODS.
A QUEST TO FINS - AND CLOSE - THE DOORS OF DEATH.

Annabeth and her friends Piper, Jason and Leo have landed at Camp Jupiter with one mission in mind. The time has come for Roman and Greek demigods to unite. With Percy Jackson, Hazel and Frank by their side, they must combine forces to find - and close - the Doors of Death.

But Annabeth is hiding a secret - a command from her mother, the goddess of war and wisdom: 'Follow the Mark of Athena. Avenge me.' Annabeth is already risking her life... What more does Athena want her daughter to do?

Now the seven demigods must begin their quest across land and sea to Rome, but what will they have to sacrifice this time - what unspeakable horrors await?

“Naturally, Coach Hedge went ballistic; but Percy found it hard to take the satyr seriously since he was barely five feet tall.


"Never in my life!" Coach bellowed, waving his bat and knocking over a plate of apples. "Against the rules! Irresponsible!"


"Coach," Annabeth said, "it was an accident. We were talking, and we fell asleep."


"Besides," Percy said, "you're starting to sound like Terminus."


Hedge narrowed his eyes. "Is that an insult, Jackson? 'Cause I'll—I'll terminus you, buddy!”

There are just no words to describe how I am feeling right now, I only just, literally seconds ago, finished reading The Mark of Athena. Suffice to say, I am a MESS! I am hyper-actively bouncing up and down while on the verge of tears. That book! It is amazing, beyond amazing, it is awesome-sauce on a colossal scale! I was so excited to read this book and now I half can't believe I put off reading it for so long, while at the same time I knew subconsciously that if I finished this novel, the wait for The House of Hades would be even more excruciating and I was right, still I am SO glad I finally finished reading this novel!

The Mark of Athena starts off with Annabeth, Piper, Leo and Jason arriving at Camp Jupiter. Percy and Annabeth's reunion was better than I imagined (judo-flips for the win) and the story was got continuously better from there, I mean, it is not possible for Rick Riordan to write a boring scene, it's just an impossibility. Things at Camp Jupiter go awry and there are ever more schemes and meddling afoot. The seven set course for Rome, for more reasons than one and Annabeth has a dangerous mission given to her by her mother, Athena. With so much happening, the heroes barely have any chance to rest, especially since the situations they find themselves landing in just keep getting worse...

As always, the characters, each and every one of them, has a perfectly developed personality with quirks and flaws. Percy and Jason, both natural leaders, find themselves clashing and needing to prove their abilities. There is also some tension that develops between Leo and Frank...
Hazel and Piper are slightly more calm compared to the rest of the group, while Annabeth is at her butt-kicking best - especially with Percy by her side!

My favourite characters are definitely Percy and Annabeth, they are so, so, so incredible and readers will ache and grieve for some of the decisions they are forced to make! Nevertheless, it is impossible not to love Percy and Annabeth in The Mark of Athena.

Now, the plot of this installment in the Heroes of Olympus series reaches new heights - I'm not even sure if Zeus could reach that high. There is action galore, the most insanely fantastic new weapons and ridiculously hilarious and action-packed fight sequences ever seen (think giants and drama)! The Mark of Athena also has to be the most (personally) devastating novel in this series yet, but do Not let that stop you from picking it up!!!

This novel is one that if you do not pick it up and devour it, you have not lived! I recommend it a thousand, million times over: READ IT NOW :) It is PURE genius!!!

**On a side note, I may just go rock in a corner until the 8th of October when I can finally read The House of Hades!

'You had to break,' she scolded it.
The ankle did not reply.