TOMORROW WHEN THE WAR BEGAN by John Marsden 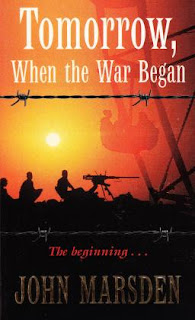 
When Ellie and her friends return from a camping trip in the Australian bush, they find things hideously wrong — their families are gone. Gradually they begin to comprehend that their country has been invaded and everyone in their town has been taken prisoner. As the reality of the situation hits them, they must make a decision — run and hide, give themselves up and be with their families, or fight back.

“At that age you think boys have as much personality as coat hangers and, you don't notice their looks.
Then you grow up.”

Set in country Australia, Tomorrow When the War Began follows the adventures of seven average, naive and inexperienced Australian teenagers and their growth as individuals and as friends. The story takes off with the main character Ellie recounting the events that came to pass since her and her friends went bush for a few days.

As the story begins to flow, it goes from being more of a second person story to completely first person. Tomorrow When the War Began is a gripping story which, from the beginning attaches you to the various different characters. Each of the characters are easy to identify with and have vastly different qualities and identities that make it so that there is someone in there that everyone will grow to adore.

From the innocent, gullible, sheltered teenagers seen at the beginning of the novel, they begin to change as the harsh reality sets in that Australia is at war and that they need to survive on their own until it's over. That is unless they wish to become captives like the rest of their town and those surrounding.

When they decide to keep themselves from being captured they also decide that it's time, time to help the war efforts and fight back guerrilla style and hit the enemy forces where it hurts, their soldiers, their vehicles and the main routes to their strongholds. But it isn't going to be an easy task and may cost the seven friends their lives.

Tomorrow When the War Began is an absolutely AMAZING book that really should be on everyone's to read list!!! It is enthralling and I when I first read it I absolutely could NOT put it down, I read it every second that I possibly could and then found myself desperate for the second. These book do not disappoint in the slightest and I recommend them to all readers!

“They say teenagers can sleep all day. I often used to look at dogs and be amazed by the way they seemed to sleep for twenty hours a day. But I envied them too. It was the kind of lifestyle I could relate to.

We didn't sleep for twenty hours, but we gave it our best shot.”