LIFE BEFORE LEGEND by Marie Lu 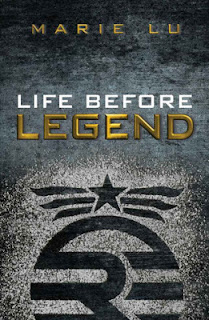 Find out more about June and Day in this never-before-seen glimpse into their daily lives before they met in Marie Lu’s New York Times bestselling LEGEND series.

As twelve-year-olds struggling to survive in two very different worlds within the Republic’s stronghold, June was starting her first day of school at Drake University as the youngest cadet ever admitted, and Day was fighting for food on the streets of the Lake sector.

LIFE BEFORE LEGEND contains two original stories written by Marie Lu that give readers a sneak peek into the lives of their favorite characters in a thrilling new context.


I smile. No, I sincerely hope that they haven't.

Life Before Legend is two short stories giving an insight into June and Day's lives a few years before they meet in Legend. In these stories, both characters are twelve years old and just finding their way with there recent changes in lifestyle, June being a prodigy starting college and Day being a young and injured fugitive trying to survive.

Day's story is the first of the two and you can't help but love it. It's all about Day's first kiss but it also shows his bravery, his incredible skills and his knack for working against the republic, giving readers a look as to why he made some of the decisions he did. Life Before Legend also shows how much Day really misses his old life, where he had his mother and brothers and a home, how he desperately wants to be a part of a family again.

While June's story shows her relationship with her brother better, how much they love each other and how sweet Metias is, as well as how June became a known troublemaker from her very first day at college. This story helps to add an explanation as to June's behaviour that isn't really covered in Legend, how June struggled to find friends because of her status as prodigy, as well as how she was bullied and not acepted.

These stories are fairly short but they are sweet, fairly action packed and incredibly insightful. If you loved Legend, do yourself a favour and read these stories, they give a small taste of the world you are dying to get back to. Life Before Legend is a cute read that won't take you long but will make you smile!

"Love you," I say.
Metias smiles back at me. "Love you too. Keep at it Junebug - someday, you'll shake the republic to its very core. You'll be absolutely unforgettable. I know it."