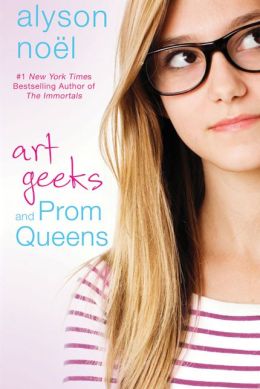 Being the new girl is tough—just ask sixteen-year-old Rio Jones.
A New York transplant, Rio has no clue how she's going to fit in at her fancy new private school in Southern California.
Plus, being late, overdressed, and named after a Duran Duran song doesn't make the first day any easier.

Then, Rio meets Kristi. Beautiful, rich, and a cheerleader, Kristi is the queen bee of Newport Beach, and she isn't friends with just anyone, so Rio is thrilled when she's invited to be part of the most exclusive, popular clique.

At first, Rio is having a great time, but as she becomes more immersed in the jet set crowd, she discovers an unwritten rule that her new friends forgot to mention:

"But why didn't you just ask me?" I set down my fork and glare at her.
"Because you were sleeping," She says, taking a sip if Chardonnay.
"I was taking a nap, Mom. It wasn't intended to be some kind of Disney fairy-tale hundred-year snooze."


Art Geeks and Prom Queens draws you into the life of 16 year old Rio Jones who is forced to move away from where she is more than happy, with her wonderful and supportive friends in New York to Southern California.

Here she feels further out of her depth than even she felt before, coping with a father who is away on business more than he is ever at home and an ex model mother who Rio often feels is more than a burden than family.

With the pressure from her mum to be the perfectly dressed popular girl that she was in her youth, Rio's first day at school is off to a rocky start but she quickly finds friendship with two art geeks like her, Jas and Mason.
But getting into trouble with them on the first day puts them on her mums bad side and she is told not to see them again.
With time she falls into the 'popular' clique and her life begins a rollercoaster ride that brings her away from who she really is and turns her into someone she vowed she would never be.


Filled with superficial b*****s, deceit and a very easily swayed main character, Art Geeks And Prom Queens, retells a frequently done plotline.
Happy but geeky main character is forced to move away from the friends she loves, she makes some nice friends but soon turns her back on them for popularity.
Things go haywire, she realises the original friends she had were good to her and she goes back to them.
Along the way both relationship and family issues occur to dramatise the story some more.

Very similar to Mean Girls, but still a book that I enjoyed despite Rio turning into a slut partway through, which honestly was more annoying than anything, but the book was still a nice read that was entertaining as well as humourous.


One aspect of Rio and her ralationships with her boyfriends was how much they changed her and how her newly found popularity made her think that essentially cheating on her boyfriend is no big deal!! It showed how deluded and stupid she had really become.

It does reflect a lot of what does happen to teenagers in school and reflects what
many 'geeky' or 'unpopular' students would like nothing more, to turn from being how they are into popular. It shows the risks and repercussions of changing who you are in such a drastic way and even that cheating on your boyfriend is a bad thing (duh!).

It is a good, light hearted read with some interesting aspects to it that you will enjoy, both the good points and the bad make Art Geeks And Prom Queens the individual book that I enjoyed.