CORSETS AND CROSSBOWS by Alyxandra Harvey 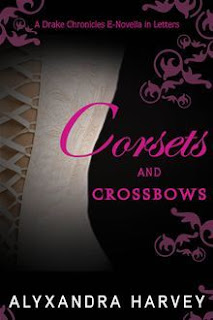 
Rosalind Wild thinks it's time for the Helios-Ra to give full membership and recognition to the female descendants of the society-after all, it is 1816 and it's time to make room for new traditions. When Rosalind interrupts a plot to assassinate the leader of the Helios-Ra, she sees an opportunity to prove her worth. But she never expected the assassin to be someone so irresistible, and off-limits. Written as a series of letters to a close confidante, this exciting e-novella gives a glimpse of the early days of the vampire hunting society as seen through the eyes of Hunter Wild's feisty ancestor


This short Drake Chronicles story is full of mystery and romance, and draws funny parallels with the third Drake Chronicle instalment, Out for Blood. Written in the form of letters, the writing style is enjoyable and funny.

Featuring Hunter's ancestor, Rosalind Wild, who is writing letters to her friend Evangeline, Rosalind commences in a theatrical tone to explain the goings on in her life. She talks about being a debutante before remarking about joining the Helios-Ra and how she finds difficulty in hiding stakes and crossbows properly on her person.

Rosalind is funny in her commentary, but also very desperate to prove that she can be useful to the League by fighting vampires. To successfully try to fight vampires, Rosalind comes up with an alter ego so as to raise fewer questions about how a proper young lady should be behaving. What she finds when she does finally come across a vampire, is no at all what she expected. Rosalind finds that the League has been lying to her which leads to the conducting of an investigation as she is desperate to find out the truth.

Historical, romantic and full of lies and twists and secrets, Corsets and Crossbows is a great read if you wish to visit the world of the Drakes and those who hunt them. Time consuming, this novella is not, you can read it easily and quickly while 100% enjoying every second of it. Corsets and Crossbows does not spoil anything in the Drake Chronicle series.

“I pulled open my window and leaned out. “Are you daft?” I whispered loudly.
He bowed extravagantly, deeply, his dark tousled hair falling over his brow. “Such poetry, my lady.”