MARGAUX WITH AN X by Ron Koertge 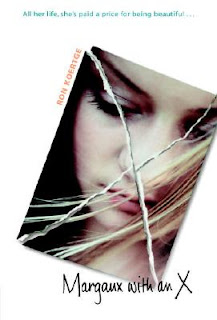 
She's drop-dead gorgeous, has a razor-sharp wit, and is a charter member of the school's most popular clique. Margaux (with an x) is the dream catch of every teenage male within her radar.

Encouraged by her caustic friend Sara, she's perfected the art of the sarcastic tease, while keeping her sweaty-palmed suitors just far enough at bay.
It's a dreary game, but at least she's not home with Mom, the shopping channel addict, Dad, the professional gambler, and a certain haunting secret from her past.

Then along comes Danny Riley — a scrawny, weak-chinned, animal-loving oddball with a quaint chivalrous streak, a kindhearted kid who can match her banter to the polysyllable and who harbors a few painful memories of his own.

Margaux with an X is the story of a teenage girl who is conflicted by those around her and has trouble finding who she is.

Between her best friend who is questionable at the best of times, her gambling father and a mother who only cares for television, she is left to fend of numerous suitors. Margaux never asked to be as gorgeous as she is, she downright hates it, she wishes the boys would just leave her alone most of the time.

But then there's Danny, the weird and eluding boy from the year below who doesn't seem to care about her looks or any romantic prospects, they talk because they genuinely like each others company.

I honestly cannot say much about this book because I am at a loss for those words, it wasn't a train-wreck, but it didn't have an interesting or capturing story line. While I guess a lot of things happened and were revealed about the characters, I saw no growth or personality quirks and the plot didn't move overly fast or far.

At times the language was too messy and over-complicated for the sake of it, descriptions were over basic  when there often needed more explanation and over-bearing when it was unnecessary  None of this world felt real to me, in fact it felt forced and bland, the concept was a good idea but executed badly.

It covered some very hard hitting issues, but I felt it was done in a clumsy manner which did not make me feel particularly empathetic towards the characters. Margaux's family irritated me and the most likable character for me was Danny's Aunt, to whom I felt was barely described. The way that both Margaux and Danny's family were portrayed was, again, very dry and boring.

I hate not enjoying a book but I've had this one on my shelf for years and have been excited to read it due to the blurb sounding exciting and interesting. I really did want to see Margaux with an X rating better, but im afraid this is one novel that I will not recommend.