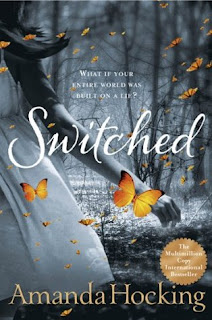 Fiction, Young Adult, Fantasy
Book One in the Tyrlle Series

What if your entire world was built on a lie?

Wendy Everly knew she was different the day her mother tried to kill her and accused her of having been switched at birth. Although certain she’s not the monster her mother claims she is – she does feel that she doesn’t quite fit in...

She’s bored and frustrated by her small town life – and then there’s the secret that she can’t tell anyone. Her mysterious ability – she can influence people’s decisions, without knowing how, or why...

When the intense and darkly handsome newcomer Finn suddenly turns up at her bedroom window one night – her world is turned upside down. He holds the key to her past, the answers to her strange powers and is the doorway to a place she never imagined could exist. Förening, the home of the Trylle.

Finally everything makes sense. Among the Trylle, Wendy is not just different, but special. But what marks her out as chosen for greatness in this world also places her in grave danger. With everything around her changing, Finn is the only person she can trust. But dark forces are conspiring – not only to separate them, but to see the downfall everything that Wendy cares about.

The fate of Förening rests in Wendy’s hands, and the decisions she and Finn make could change all their lives forever...


As you get to know Wendy and her family you grow to feel sorry for her and hope that everything goes well for her. With her mother in a mental hospital because she attempted to kill her on her sixth birthday and her father deceased she only has her older brother, Matt, and Aunt, Maggie, left to turn to.

From the moment you first meet Wendy, she stands out in the crowd. When the only person who bothers to treat her nicely in any way turns up at her window  after insulting her at the school dance you know that things are going to be interesting. Finn is straight forward and unconcerned with following many social conventions.


When Finn reveals that Wendy is not human and is in fact an important member of the Trylle. He encourages her to come back to her 'real' home with him, where she will feel more comfortable and relaxed, but she refuses his offer. Using her powers of persuasion, she compels Matt to take her to visit her 'insane' mother so that she can piece together the truth from Finn's revelation along with her mothers accusations that she, Wendy, has never been her child.
The truth confronts Wendy and when she is ambushed by evil Tyrlle called the Vittra and Finn comes to her rescue, she is forced to flee her home and family with only a brief goodbye to her stricken and confused brother.

Now lost in a world she does not know and forced into a position she does not want to be in, Wendy must fight for what she believes in and follow her heart amongst rules, obligations and a social hierarchy that she feels she will never understand.

The characters in Switched are complicated and show conflicting emotions, like any real person has, and are deep and easy to relate to. Wendy cares about her family and will do anything to keep them safe, she comes to discover love and experience other emotions she never thought that she could feel. Finn is the kind of character who is elusive and distant at the beginning but as the story progresses you come to find that you know him better than you originally thought you would. Finn shows loyalty and eventually compassion which makes him likable that goes with his intense and dark, yet alluring image. Besides the Wendy and Finn, I found that I grew to love Matt's adoration and love for his youger sister Wendy but I grew to absoloutely Rhys, with his quick  witted comments and easy-going nature along with his strong loyalty and compassion for his friends.

The plotline was creative and not one i had read about before, the use of description was good but not overdone so that I felt bored and like the story was going nowhere. To me the idea felt quite original and I was quite intrigued as to how it would all play out. The setting was absorbing and I felt drawn into the world of Switched even more so because of how well the scene was set.
The ending to Switched was something I never expected to happen, where she left it was a perfect balance between leaving some questions answered and some not.

Right now I am itching to purchase book two in the series, Torn! I highly recommend this book for anyone interested in
Paranormal/Fantasy/Fiction books that are sick of the usual storylines or wanting to try something a little bit different.

“The desperation was coming off you in waves. You were all but begging to dance with me. I am doing you a favor.”
― Amanda Hocking, Switched