Adult Review: CHRISTMAS WITH THE ALEXANDERS by M. Malone 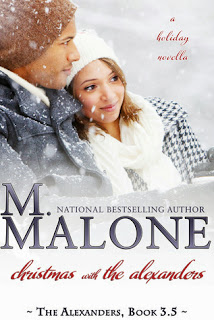 Elliott Alexander's security business is booming and he's finally in the position to come home for good. But home brings bittersweet memories and puts him in the path of a woman who makes him feel things he isn't ready for.


Kaylee Wilhelm knows what she wants for Christmas, for Elliott Alexander to notice she's alive. Unfortunately he doesn't seem to like her much so she's spending the holidays with her disapproving parents, both of whom think she's screwing up her life.

When Kay's car skids out of control on Christmas Eve, she's forced to reach out to the only man she trusts to save her.

This novella, Christmas With the Alexanders, is exactly the fix that fans of the series need to last them until book four is released!

Kaylee has wanted Elliott for quite a long while, despite his seeming dislike of her.
So she decides that visiting with her parents will be the plan for Christmas.

Elliott can't stop thinking about Kay whilst spending Christmas with his family and when he gets a call from her asking for help because her car skidded off the road, he doesn't hesitate to drive to her rescue.

Told mostly in Kay's and Elliott's view points,  we get to learn more about these two characters. Kay is very self-conscious about herself, especially in regard to her weight and curvier figure, and is used to receiving criticism for many perceived mistakes.

Elliott is very protective of those in his care, but he's always been careful to keep his distance from Kay because of the feelings she evokes in him, this Christmas they are much harder to ignore, but there still seems to be something holding him back.

This novella serves as a great introduction into what Kay and Elliott's novel will be about, but this novella is about the rest of the Alexander family too, readers getting to see how the other couples are going and there is a really sweet development that takes place within this story.

I do wish Christmas With the Alexanders could have been longer, but it was still just awesome to get to see what the characters were doing and gt a taste of what is coming next in the series.