THE REPLACEMENT by Brenna Yovanoff 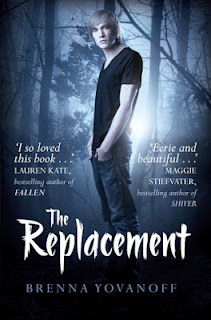 Mackie Doyle is the Replacement. Thought he lives in the small town of Gentry, Mackie comes from a world of tunnels and black murky water, a world of living dead girls ruled by a little tattooed princess. He is a Replacement - left in the crib of a human baby sixteen years ago. Now, because of fatal allergies to iron, blood, and consecrated ground, Mackie is slowly dying in the human world.


Mackie would give anything to live among us, to practice on his bass guitar or spend time with an oddly intriguing girl called Tate. But when Tate's baby sister goes missing, Mackie is drawn irrevocably into the underworld of Gentry, known as Mayhem. He must face the dark creatures of the Slag Heaps and find his rightful place - in our world, or theirs.


Mackie Doyle lives in Gentry, a small town with a slightly haunted feel to it. He loves playing his bass guitar and lives with his parents and sister, though they're not really his family... because Mackie is a Replacement, left in the crib to replace the human infant taken. He's allergic to blood, iron and consecrated ground and death is coming steadily closer day by day.
Tate is an odd girl who Mackie goes to school with, she used to have friends... before her little sister supposedly died, Tate knows that she's alive, that she was taken and she's decided to enlist Mackie's helpn in getting her sister back. But Mackie is reluctant to get involved, will he help Tate before it's too late?
I picked up The Replacement to read because I found the blurb to be darkly enticing and was intrigued to the point that I had to check it out.


Mackie is a cute character, he has a sweet relationship with his older sister who always looks out for him. He has amazing best friends and is oddly endearing though I did get slightly annoyed when he proved to be kind of slow on the uptake. He was still an enjoyable character to read.
His best friend, Roswell, is the kind of friend we all want.
Tate is a stubborn character, she doesn't care what people think of her and is fearless in her pursuit of finding her sister. She is also relentless in her bid to get Mackie to help her.
The originality was great, the storyline was fresh and full of intrigue. I loved that this story had a truly dark feel to it. The plot unravelled in a way that was surely meant to at least somewhat scare, with the scenes and landscapes getting gradually darker and darker as the story progressed and the characters getting introduced throughout the second half of the novel got stranger and, quite often, nastier. The plot was well-paced and the last chapters were full of excitement. A nice, kind of haunting read.

“Why does she always seem to think you drive like we're holding up a bank?"

Roswell grinned and rolled his eyes, "Because that's what teenagers do, right? They also carve swastikas into their arms, steal prescription drugs from old people, and freebase cocaine. I need to institute a policy where she stops watching 60 Minutes and pretty much all public service announcements.”