TEMPTING THE PLAYER by J. Lynn 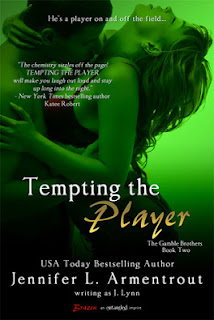 Chad Gamble, all-star pitcher for the Nationals, is one of the best players on—and off—the field. And right now, the notorious bad boy wants Bridget Rodgers. But with her lush curves and snappy comebacks, the feisty redhead is the kind of woman a man wants to settle down with…and that’s the last thing Chad needs.When the paparazzi catch them in a compromising position, Chad’s manager issues an ultimatum: clean up his act or kiss his multi-million dollar contract goodbye. To save his career, his meddling publicist says he'll have to convince everyone Bridget isn’t just his flavor of the week, but his girlfriend.Being blackmailed into a fake relationship with Chad Gamble isn’t easy, especially when the sizzling physical attraction between them is undeniable. With a month to go on their arranged pretense, it's going to take every ounce of willpower they have not to fall into bed together...or in love.


After reading Tempting the Best Man, I honestly didn't think Jen's books could get much sexier, I mean, seriously, sexier than Chase, who'd have thought it possible? Well, mission accomplished J. Lynn (aka Jennnifer L. Armentrout), you gave us Chad!

Chad is an incredibly well-known player, and not only for baseball. There are pictures left, right and centre of Chad with all manners of women, and his management have given him an ultimatum: clean up his act or lose his contract.
Bridget Rogers is best friends with and works for Madison Daniels, she also knows Chase Gamble (Maddie's boyfriend) and by extension, his brother Chad. Bridget runs into Chad at a club and things go well, until Bridget remembers exactly how much of a player he is, but he seems to be inescapable and they are caught in a compromising position.
Chad's new publicist knows she has her work cut out for her when it comes to redeeming Chad's public image, so when the Bridget situation arises, well, it seems like a perfect plan.
Bridget is blackmailed into being Chad's fake girlfriend, the key word being 'fake,' they may think they have to work hard to be convincing, but it's actually keeping their hands off of each other that they'll really have to work at.

The storyline for Tempting the Player is great, it captivates and entices you to read page after page until the entire ebook is finished, you can't simply stop part way through. This novel is definitely steamier and a lot sexier than before, I cannot wait for Tempting the Bodyguard (Gamble Brothers Book Three) to come out, you get an idea of what it will include from what happened in this book, and it sounds simply awesome.


The character dynamics really work well, tying this novel to both book one and book three. Bridget is strong, confident in her way and definitely not a stereotype. Chad is sexy and demanding, he loves to get what he wants and is slightly misunderstood by those who know of his public image.

“Bridget did the only thing she could do in this situation that wouldn't end with her doing a life stint in prison. She flipped the woman off.
With both hands.”