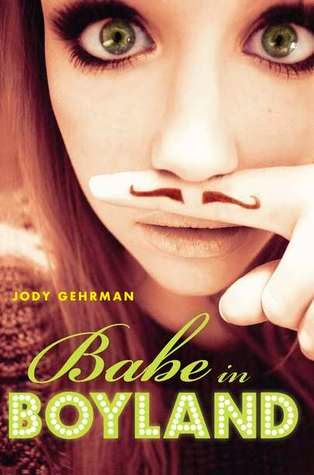 
What do guys REALLY think?

Natalie
is going to find,
even if it means disguising herself as a guy,
enrolling at an all-boys prep school,
and trying not to crush on her hot roommate
to get the answers.

“The point is, feelings can change - and often do - abruptly. It's one of the riskiest aspects of falling for someone, especially during these tumultuous years when we're young and restless.”

I've been wanting to read this book for SO long, so it was great to finally get my hands on a copy and get to read it.

Natalie has an alter-ego, Dr Aphrodite - her schools newspapers' love columnist, and that alter-ego is receiving a lot of hate from the male population of her school. They're saying things like: she doesn't know what she's talking about, and her advice never takes a guy's view point into consideration, so she's come up with a plan to remedy this.

Natalie decides to undercover at the local all-boys prep school as Nat.
She thinks that this way she can get honest answers to the seven questions girls' most want answered, but she never counted on having a hot roommate...

Natalie isn't very experienced in the love department, in fact, she doesn't really know much at all. She is amazingly determined and does her best to do right by people, she grows so much throughout this novel and becomes a better person along the way, however she does struggle as her situation becomes more and more convoluted.

Chloe and Darcy are Natalie's best friend and wholly support her with her undercover mission. Chloe is strong-willed and often comes across as bitchy, she also is somewhat obsessed with cleanliness. Darcy is sweet and friendly, she is a little weak-willed about a guy in the beginning, and acts as a kind of mediator between her two best friends upon occasion.
I love the friendship between these girls, it's so real and full of the ups and downs and unconditional support of real-life friendships.

Tyler is a sweety, he's totally awsome.
Emilio is gorgeous, sweet and down to earth, however he loves his privacy.
The friendship that starts awkward but quickly developes between Nat(alie) and Emilio is intriguing and very well written.

By going undercover as Nat, Natalie learns so much more than she ever expected, about girls and boys, and what it really means to appreciate being a girl. She also learns that there's more to people than looks or social status, and that everyone has different faces they put on when with different people.
She sees a whole new side of her friends and of herself as well.

The part of the story concerning Emilio's sister was really awkward, mostly at the end of it, while I understand how most of that story-line served a purpose of illustrating how girls' put up fronts when trying to impress guys and it was successful in getting that message across, I just felt that it shouldn't have ended the way that that single branch of the story did - it was a bit too much and it's really the only thing I didn't like in the story.

Aside from that, I LOVE the way that the overall story wrapped up, how all the facets came together. This is a fast-paced, light and fluffy kind of read that you can get through easily, it has depth, humour and is incredibly well thought out.

Anyone who likes the movie She's the Man will absolutely love this novel, without a doubt.

“Supposedly, guys think about sex every eight seconds. If that's true, how can they talk to their grandmothers?”