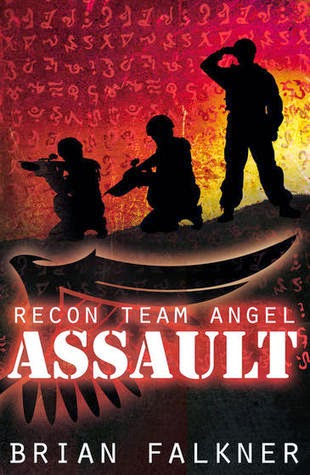 
The first in a high octane sci-fi adventure series by best-selling and award-winning author, Brian Falkner.

It is 2030, and the world is at war with an alien race. The Bzadians. The battleground: Earth.


Recon Team Angel, made up of teenagers from around the world, has been training for years. They have learned Bzadian languages. Learned how to operate their weapons. How to work, eat, and think like them.

Now it is time to act. Recon Team Angel must slip behind enemy lines, work their way into the top-secret alien facility under Uluru, and uncover the truth. But what they discover will shock not just them, but all of humanity.

What drew me to this novel was the name of the series (Recon Team Angel) - it just sounds so cool, and the cover - it's so intriguing.

Set in the year 2030, Earth has been invaded and what is left of humanity is at war with an alien race: the Bzadians - a race of ugly, vomit-coloured beings who have no care for human life, other than the desire to eradicate it.
Recon Team Angel is a group of teenager of multiple nationalities joined together to go undercover, infiltrating the enemy to learn their secrets and report back.
Disguised as their enemies, a team of six "Angels" goes behind enemy lines to learn truths, but their mission is compromised from the get-go: there's a traitor.
Not every Angel is going to make it out alive...


Very interesting introduction, it surprised, but then again I probably should have actually read the blurb before I started reading the actual book...
There is also a glossary that helps you to understand some of the language the characters in the story use.

Chisnall is brave and easy for anyone and everyone to under-estimate. Seargeant Holly Brogan is tough and icey, "Phantom" Price is awesome (one of my favourite characters) - she's fast and determined, Monster likes to talk about "The Monster" in third person which is amusing, Wilton is funny and skilled, and Hunter is a smart-arse.
They all come together to make one hell of a team. The story os told from Chisnall's point of view, with a few scenes evry now and again from the view point of a Bzadian.

The author does reiterates the meaning of words that are included in the glossary at the start of the book, throughout the novel for the first time each of the words is used, which is useful as it means you don't have to keep racking your brain to remember the definitions or keep flipping back to where the glossary is.

There is suspense throughout the novel as you are kept genuinely wondering who the traitor is, I did have a feeling about who it would be but it wasn't even slightly confirmed until about halfway through part two of this book.

The story only reveals small amounts of information pertaining to the plot at a time, and only as they become relevant - this allowed the story to continually hold my interest as I had no idea what was coming next.

Assault sticks to a steady pace and has an incredibly interesting concept.


I thought some of the names/labels in the novel were a little juvenile, but they add some fun to the story, especially when paired with witty and sarcastic banter and general teenage antics.

I don't know how I feel about the epilogue, it seemed not very happy, and a little too final, plus it made me a little sad,  and it made it so I really, really want to read book two: I have to know what happens next, I need to know everything!