HOW TO RUIN A SUMMER VACATION by Simone Elkeles 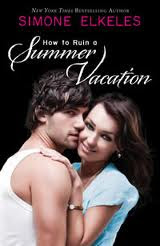 (Description source: Goodreads)
Moshav? What’s a moshav? Is it “shopping mall” in Hebrew? I mean, from what Jessica was telling me, Israeli stores have the latest fashions from Europe. That black dress Jessica has is really awesome. I know I’d be selling out if I go with the Sperm Donor to a mall, but I keep thinking about all the great stuff I could bring back home.
Unfortunately for 16-year-old Amy Nelson, “moshav” is not Hebrew for “shopping mall.” Not even close.

Going to Israel with her estranged Israeli father is the last thing Amy wants to do this summer. She’s got a serious grudge against her dad, a.k.a. “Sperm Donor,” for showing up so rarely in her life. Now he’s dragging her to a war zone to meet a family she’s never known, where she’ll probably be drafted into the army. At the very least, she’ll be stuck in a house with no AC and only one bathroom for seven people all summer—no best friend, no boyfriend, no shopping, no cell phone…

The whole reason I picked up this book was because Simone Elkeles wrote it - enough said. I've read her whole Perfect Chemistry trilogy and fell in love with her writing style and her characters, so when I saw that How to Ruin A Summer Vacation was by Simone, I just had to read it.
Amy has plans for her summer and she's happy, at least until her plans are changed for her, and these new plans don't include friends, a boyfriend or even staying in America. Amy's father -the Sperm Donor- has decided it's time for Amy to visit Israel and meet his side of the family.


Visiting Israel sounds terrible to Amy, especially after she meets her cousin who appears to really dislike her. Amy also meets Avi, the hot local boy with a chip on his shoulder, Amy has a lot of things happening this summer but will she like them? Has her summer really been ruined by going to Israel, or is it only going to get better? And will Amy ever  be on good terms with her father?
How to Ruin a Summer Vacation is a nice, funny read with amazing characters and some very heartwarming moments. Amy is a character with a lot going on in her life, she's seeing her father for the first time in a long while, about to meet a family she didn't know she had and leaving her summer plans behind to visit a foreign country, she has a lot of conflicting emotions.
Amy is quite snarky (and sometimes not the nicest in her comments) but she is quite hilarious in the things she says and does, she has a lot of flaws and is easy enough to relate to, a pretty likable character.
Avi is handsome and mysterious and completely unapologetic about his action, the tension between Amy and Avi is great, it's amusing and sweet, there are quite a few moments that I would have loved to have read from Avi's point-of-view. Amy's cousin enjoys giving her grief, but Amy slowly begins to settle into her place in her new family.

“And my piece of advice is... don't flirt with any of the female instructors. They all have access to weapons bigger than yours.”