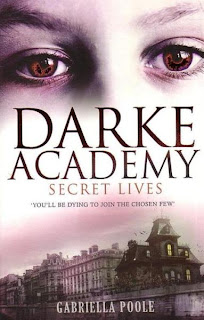 The Darke Academy is a school like no other.

An elite establishment that moves to a new exotic city every term, its students are impossibly beautiful, sophisticated and rich, and the more the new scholarship girl Cassie Bell learns about the Academy, the more curious she becomes.
What sinister secrets are guarded by The Few, —the select group of students who keep outsiders away?
Who is the dark stranger prowling the corridors at night?
And what really happened a year earlier, when the last scholarship girl died in mysterious circumstances?

Cassie quickly discovers that a little knowledge may be a dangerous thing, but knowing too much can be deadly.

“Oh, get down from your high horse before you fall off.”


Secret Lives is the enticing first novel in the Darke Academy series.

It takes flight in the illustrious city of Paris, which you soon realise is the perfect place for the annually moving, elite boarding school, Darke Academy, to be.
When intelligent and very middle class Cassandra Bell, aka Cassie, arrives at the gates of Darke Academy she is in awe of it's size looming over her and its' gothic appearance.
The prestige and elite standards overwhelm Cassie in not only the sheer size and looks, but also in the attitudes and persona's of the other students.
This being amplified even more so due to her being the looked down upon for being the 'scholarship girl'.

Despite being the insignificant, lowly scholarship girl, Cassie soon makes friends as well as some very important enemies.
She soon finds herself ensnared within the select, prestigious group within the school named The Few, drawn in by their charisma and effortless good looks Cassie soon discovers a secret that could mean the end of life as she knows it.

When I first set my sights on Secret Lives, I was immediately drawn in and curious about the series.
The cover alone makes it stand out of the shelf, with the striking title and those menacing, dangerous, yet somewhat alluring eyes.
These elements accompanied by the  image of what one can only assume to be the academy gives an image that keeps in your mind and provides a sense in intrigue.

Secret Lives  was a bit difficult to get into at the beginning but I kept reading, curious as to where things would lead. I was well rewarded, because the story soon began to fly and I became trapped in Cassie's world with her. At the end of this novel I decided that I simply HAD to read the next few!!
Cassie, despite being the very stereotypical female protagonist, was a decent enough character and I even quite enjoyed how the love triangle was written.
This is a really good book once it gets going, worth reading and with some great characters!

“Pretty?" mused Katerina. "I suppose so. She has unusual looks. True beauty, I think, requires a touch of cruelty. That seems to be missing."
"Good," muttered Cassie under her breath.
Richard shot her a warning look.”