THE SON OF SOBEK by Rick Riordan 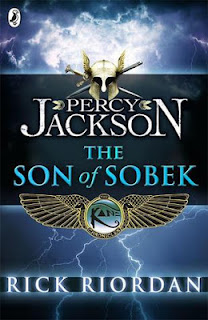 Carter Kane is investigating rumored sightings of a monster on Long Island when he runs into something else: a mysterious boy named Percy Jackson. And their meeting isn't exactly friendly. . .

A giant fist the size of a dishwasher shimmered into existence and slammed Camper Boy into the next county.
I mean I literally punched him out of his shoes.


Rick Riordan is a genius! In this short story, he brings together two of his series - The Kane Chronicle and Percy Jackson and the Olympians. Carter Kane is searching around Long Island for something that has been causing magical disturbances, but so has Percy Jackson. Percy and Carter  clash from the start, due to misunderstandings and male egos.


This short story is hilarious, there are knock out punches, giant crocodiles and water fights.
This crossover is amazing in the way it handles two mythologies, two leading characters and so much action, as well as what the implications of such a meeting as that between Carter and Percy could mean.

The Son of Sobek is told from Carter's point of view and will help tide over any readers waiting for the next Rick Riordan novel. You do not necessarily have to have read The Kane Chronicles or Percy Jackson and the Olympians to understand what goes on in this story, but it is best to at least have read one of the series to properly understand the context.

A great way to spend a short amount of time, something you will not regret and that does give avid readers hope about potential future stories.


Camper Boy was sitting nearby in waist-deep water, looking dejected. My magic rope had wrapped round his sword arm,then lashed his hand to the side of his head.


I rate The Son of Sobek Five out of Five!!!