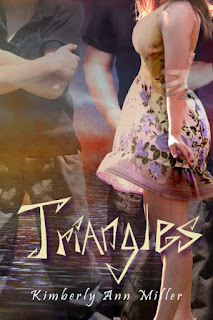 In the Bermuda Triangle—a lot.

Hoping to leave behind the reminders of her crappy life--her father's death years ago, her mother's medical problems, and the loser who’s practically stalking her--seventeen-year-old Autumn Taylor hops on a ship with her sister for a little distraction. When she wakes up in the Bermuda Triangle, she fears she's gone nuts for more than one reason: that loser’s suddenly claiming they're a happy couple... a hot guy is wrapping his arms around her and saying "Happy Anniversary"... and suddenly, she’s full of bruises, losing her hair, and getting IV medication. Autumn visits the ship's doctor, hoping for a pill or a shot to make the craziness go away. Instead, she's warned that these "alternate realities" could become permanent.

She just has to ask herself one question—how the hell is she going to get out of this mess?

I have been dying to read Triangles since I very first found out about it when participating in the cover reveal! Th cover is simply gorgeous, but that's not the only thing gorgeous about this - in fact there are a lot of gorgeous aspects to Triangles: the location! the two guys! and the writing style!!!

Triangles is the story of seventeen-year-old Autumn Taylor (by the way, I love her unique name: Autumn Rayne Taylor), who has just recently quit school and is desperately searching for a way out of her hometown. Autumn feels responsible for the fate of her parents and carries the guilt around with her, it especially comes to the surface when she and her sister, Jessica, go on a cruise to the Bermuda Triangles which was organised by her mother years earlier. What makes Autumn more reluctant to go on the cruise? The fact that her shadow, a work mate who has a crush on her, ends up on the very same cruise.

Autumn thinks her vacation can't get much worse... that is, until she starts waking up confronted with alternate realities involving family, boys, secrets and choices. She is also confronted by the possibility of any one of the realities becoming permanent.

Autumn is a very stubborn character, very set in her ways of thinking and seeing things, she has let her grief consume parts of her - the more optimistic, carefree parts of her, and it really shows in her interactions with other people, specifically her interactions with her sister and Joey. But Autumn is also strong and smart, as she lives the alternate realities, she holds tight to her morals and comes to several realisations that you can see giving her the potential to become a better person and someone who makes better decisions.

The plot is very well paced and it is so easy to forget to put this book down, the characters, the storyline, they all serve to pull you in and bring YOU to the realisation that there are some things that mean more, that should be a priority despite more often being pushed aside, and that no matter what you might think, there is always more to people than meets the eye.

Triangles is an absolutely amazing novel and it has made it impossible for me to not read any future books by Kimberly Ann Miller! Triangles definitely has a place on my list of all-time favourites, it teaches you to always look on the bright side of life, it is so insight and heart warming with hidden depth, an absolute must read!!!