DATA RUNNER by Sam A. Patel 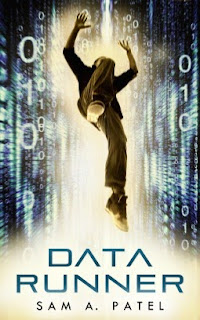 In the not-too-distant future, in what was once the old City of New York, megacorporations have taken over everything. Now even the internet is owned, and the only way to transmit sensitive information is by a network of highly skilled couriers called “data runners” who run it over the sneakernet.

It is a dangerous gig in a dirty world, but Jack Nill doesn’t have much choice in the matter. A brilliant young math whiz and champion of parkour, Jack must become one of these data runners in order to get his father out of a major gambling debt. But when a mysterious stranger loads Jack’s chip with a cryptic cargo that everybody wants, he soon becomes the key figure in a conspiracy that could affect the entire North American Alliance.

Now it’s all up to Jack. With the help of his best friend, Dexter, and a girl who runs under the name Red Tail, Jack will have to use all his skills to outrun the retrievers and uncover the truth before they catch him and clip him for good.


Jack is a genius at maths and is incredibly tech savvy, as well as a quick and agile member of the Dragons parkour team. Living in a future where megacorporation are in control and vying for power, the only way to transport valuable and priceless information is via a specialised courier service, where "data runners" run their cargo over the sneakernet whilst avoiding terrible dangers - like those who wish to intercept of eliminate cargo...


Jack Nill takes an opportunity to become one when his father runs them into a very large debt, but there is a conspiracy surrounding one of Jack's jobs that could change the world as he knows it, and everyone, it seems, is after this cargo...

Well written, Data Runner is a slightly more complex read than I think most young adult readers are used to, this does not detract from the story, but rather means that you have to pay attention to the story and to everything the main character is saying to understand what is happening at your current moment and what is happening in upcoming events.

Jack is an intersting character, he is incredibly intelligent, whilst also athletic. He is not without fear but he does what he believes is right and is stubborn in his determination.
Dexter is Jack's best friend, he looks out for the people he cares about and does what he can to help. While Red Tail is mysterious and absolutely kick-ass, though not without her limitations.

The conspiracy and the mystery of everything that was going on and how events and information was connected kept you on your toes and wondering what was going on and what was going to happen next.
Reasonably paced, Data Runner holds a unique and well-built world that was easy to visualise. My favourite aspect of this novel was the friendship it showed, how they developed and the lengths that people went to for each other.

Data Runner was definitely left very open ended and Jack's story in no way felt like it was over, I'm curious to see what another installment would hold.

There are no limits, only plateaus.