This is a weekly meme 'Waiting on Wednesday' that I take part in, it is hosted by Breaking the Spine


It is a meme where you post about a yet-to-be-released book that you are looking forward to reading. Here is a book I have been highly anticipating: 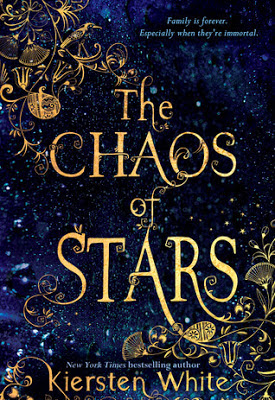 The Chaos of Stars
by Kiersten White

Isadora’s family is seriously screwed up.Of course, as the human daughter of Egyptian gods, that pretty much comes with the territory. She’s also stuck with parents who barely notice her, and a house full of relatives who can’t be bothered to remember her name. After all, they are going to be around forever—and she’s a mere mortal.Isadora’s sick of living a life where she’s only worthy of a passing glance, and when she has the chance to move to San Diego with her brother, she jumps on it. But Isadora’s quickly finding that a “normal” life comes with plenty of its own epic complications—and that there’s no such thing as a clean break when it comes to family. Much as she wants to leave her past behind, she can’t shake the ominous dreams that foretell destruction for her entire family. When it turns out there may be truth in her nightmares, Isadora has to decide whether she can abandon her divine heritage after all.

The Chaos of Stars sounds so incredibly intriguing, especially since I haven't read many YA books about Egyptian gods.
I also really love the cover, the contrast of the colours and the subtle intricacies.

What do you think of The Chaos of Stars?