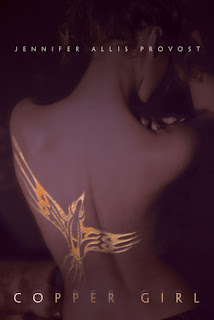 Sara had always been careful.

She never spoke of magic, never associated with those suspected of handling magic, never thought of magic, and never, ever, let anyone see her mark. After all, the last thing she wanted was to end up missing, like her father and brother.


Then, a silver elf pushed his way into Sara's dream, and her life became anything but ordinary.


"When you offered a token and lay nearly bare before me I assumed you wanted me."
Token? Oh right, my panties.
"And tonight ,you have bathed for me and attired yourself as a queen, and you have allowed me ingress to your chamber. What else was I to think?"


Copper Girl  started off in a very individual way that right from the beginning had me absolutely  enthralled.


It follows Sara into her post war world where magic has been outlawed and the government has robots patroling all areas each day for the protection of the ctizens.
They enforce strict laws and regulations, including curfews and food rationings.
In this very sterile and unnatural world Sara hides her family history of being a major magic users but when a silver Elf named Micah starts coming into her dreams and stealing her panties afterwards, Sara feels a bond to him like never before.
Sara and Micah begin a relationship that draws them deep into the world of magic and otherworld beings that she tried to forget existed and they are drawn together in ways that can never be reversed.
When Sara discovers the fate of her missing brother and tries to delve further into what happened to both him and her father many years ago, there is no turning back as she stumbles upon government secrets that were never meant to be revealed.
Full of magic, naked comb-baring Nymphs, built sexy elves with awesome hair, humour and a government with a choke-hold on society what else could you ask for?
I began Copper Girl eager to see how Provost would weave the worlds of humans and elves together and I was pleasantly surprised when the transition between worlds didn't seem like a total dogs' breakfast like in some other novels I have read.
The worlds were well written but I fear that, as I generaly don't read too much into complicated back stories often, I missed important information in regards to the war between the Mundanes and Magic users. So I shall have to re-read Copper Girl before the sequel comes out.
Some aspects that I found quite irritating and unrealistic was that after 'meeting' Micah briefly only a few times, she was head over heels and almost ready to marry him, their relationship at the beginning seemed almost child-like and fanaticalistic to me. The way that Sara just accepted everything and wanted Micah so much despite them barely knowing each other really irritated me.
I also found that while most aspects of Copper Girl  were excellently explained in a detailled, thorough manner, others further on in the novel were glossed over so that some parts felt overly rushed and bulky, as opposed to the finesse shown at the beginning.
I enjoyed this book and the more time that I have to process Copper Girl, the more I feel that I liked it and the more positive I feel towards it. The characters and surroundings have depth to them and I am keen to see what the next installment in the Copper Legacy has to offer.