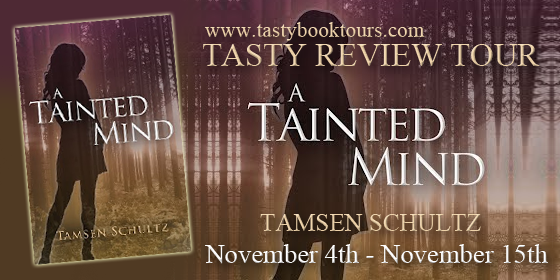 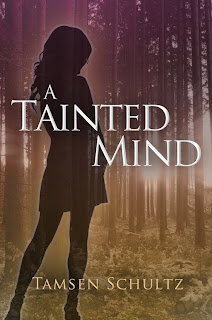 
OBSESSED with her job as a medical examiner and lead consultant with the FBI, Dr. Vivienne 'Vivi' DeMarco is a woman running from her own demons. And finding the remains of a body on the side of a road in rural upstate New York wasn't part of her plan.

FRUSTRATED that the ghosts from his past won't leave him alone, Ian MacAllister makes for a reluctant Deputy Chief of Police of Windsor, New York. But as more victims are discovered, all women that bear a shocking resemblance to Dr. DeMarco, he knows he'll need to call on all the skills he learned as an Army Ranger if he wants to keep her safe.

DENIED over and over again of the one thing he desires most, a killer may have finally reached his breaking point. The only question that remains is, will he take Vivi and Ian with him?

When I read the description for A Tainted Mind I was really intrigued, despite watching a lot of crime shows on t.v., I haven't really read all that many which is the other part of the reason why I had to pick up A Tainted Mind.

Vivi is just trying to get away, and with no destination in mind, she's just thinking of passing through Windsor. Things don't go according to plan, however. Changing a tire in the rain and hearing a strange noise leads Vivi to a tragic discovery.

Ian MacAllister is reluctant in his job with the Windsor Police, has his own demons much like Vivi and hates to acknowledge them, but he is fully committed to finding this murderer, especially as more and more victims are discovered.

Each and every victim bears an eery resemblance to Vivi  and everything is reaching a fever pitch, especially for the killer - which could have the most devastating results...

A Tainted Mind is told from both Ian and Vivi's view-points.
Vivi is strong, independent, compassioante and incredibly smart, but not without her vulnerabilities. Ian has issues that he finds hard to let go of and somewhat let's it colour how he views himself, however he is strong, honourable and insightful.
The way Vivi and Ian related to one another, it was easy to see the connection between the two, the interactions weren't over-the-top, they were realistic and completely enthralling, some of my very favourite scenes.

I loved the twins characters, they were hilarious and totally, ironically, unique. I really liked Nick's character, despite being sarcastic, to me he was also very self-deprecating. The dynamics of Vivi's family, Ian's co-workers and the Windsor community were amazingly written, and I immensely enjoyed reading this story, especially for this fact. I also loved how Tamsen realistically wrote Post Traumatic Stress Disorder into the story in a believable way that at the same time as adding to the story, also educated the reader.

While the story-line was intense and well-paced, elements of it were slightly predictable - I guessed correctly who the murderer was at the earliest possible moment that I could, however, this in no way detracted from my reading experience. The story is believable and really immerses you, and something that you absolutely HAVE to see through to the conclusion.


I rate A Tainted Mind Four out of Five!!!

“You gotta be kidding me.” Ian crossed his arms and stared at the board. The newly updated board of death. They’d started with eighteen women, three confirmed dead and the other fifteen missing. The last time Ian had looked at the board, Carly had eliminated five of the victims, bringing the number down to thirteen women who fit the profile.

This board had twenty-one women on it. Girls, some of them. And went back over fifteen years.
“There were a few earlier than this woman, or, uh, girl,” Carly corrected herself, pointing to the first picture on the board. Amanda Corlis, seventeen, found raped, strangled, and murdered in a summer resort town in southern Maine. She was probably getting ready to go to college. “But they only had one or two similarities so I didn’t include them,” she added.

“Shit.” Ian ran his good hand over his face. “So, how many of these women are missing and how many confirmed dead?” Ian couldn’t believe he was hearing those words out of his mouth. This wasn’t Afghanistan, asking for “confirmed dead,” while standing here in his small, quiet town was more than surreal. “Ten in total are confirmed dead. The remaining eleven are missing, presumed dead,” Marcus answered. His voice sounded about how Ian felt.
“And do we have the files?” Vivienne asked.
Carly nodded. “I was able to track down everyone I needed yesterday, and we have all but one, but that one should be here today.” They all stared at the board for a long, silent moment. Ian thought about turning to Vivienne and asking that she call in the Bureau. But as he studied the board, a pattern emerged in his mind. A plan.
“We need timelines,” Ian said.

His officers looked at him with a combination of curiosity and eagerness in their expressions. Vivienne’s face said something more along the lines of “you know what we need to do, now tell us.” That she didn’t bother to hide that little bit of “I told you so” brought a faint smile to his lips. “A couple of timelines. Of the women we know are dead, we need to know when they went missing and the estimated times of death,” Ian continued.
“To get an idea of how long he holds them,” Marcus interjected, speaking more to himself than anyone else.
“But we also need to know more about where they were last seen. If they were seen at a bar on Friday night and reported missing on Saturday, we’ll have a more reliable sense of when the clock started ticking for them,” Ian kept talking.

“But if they went missing from somewhere where it’s harder to lock down a time, like if they went camping by themselves or something like that, then we need to take that into consideration,” Carly added, catching on.
Ian nodded. “We also need to know where they went missing from and where the bodies were found. If there is any pattern there, it might give us an idea of how far he takes them from the grab sites. And it might also help us know where to look for the other women, depending on what we find.” Both Carly and Marcus moved into action—pulling up their computers, calling off dates and locations, examining the files.
“Ian?” Vivienne’s voice held a note of concern.

He swiveled his eyes from his officers to Vivienne. He could tell by the look on her face that she’d seen the same pattern on the board he had. He gave an almost imperceptible nod.

“And folks, I hate to say this, but I think we need to work fast,” Ian added. Both heads shot up. “When he started his spree, he went after about one woman a year for several years,” Ian continued. “But in recent years, his attacks have been getting closer and closer together. If all these women really are his victims, a few years ago he went after two a year. Then there were the three in Boston, all in one year. After that, it looks like there might have been a short break for some reason, but he picked up again a little less than a year ago, and since then he’s already gone after two, with Rebecca being the most recent.”
“What does that mean? Other than the obvious, I mean,” Marcus asked.

“It means that he is devolving,” Vivienne answered. “Whatever it is that’s driving him is becoming more and more of an obsession. To the extent he’s losing control over it.” 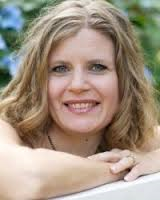 Tamsen Schultz is the author of The Puppeteer and “American Kin” (a short story published in Line Zero Magazine) and is a three-time finalist in the Pacific Northwest Writers Association annual competition. She worked in the field of international conflict resolution and co-founded a non-profit prior to attending law school. Since graduating, she has worked as a corporate attorney and, like most real lawyers, she spends a disproportionate amount of time thinking about what it might be like to do something else. She lives in Northern California in a house full of males including her husband, two sons, a cat, a dog, and a gender-neutral, but well-stocked, wine rack. A Tainted Mind is her second novel and her third, These Sorrows We See, is tentatively scheduled for release in late 2013.