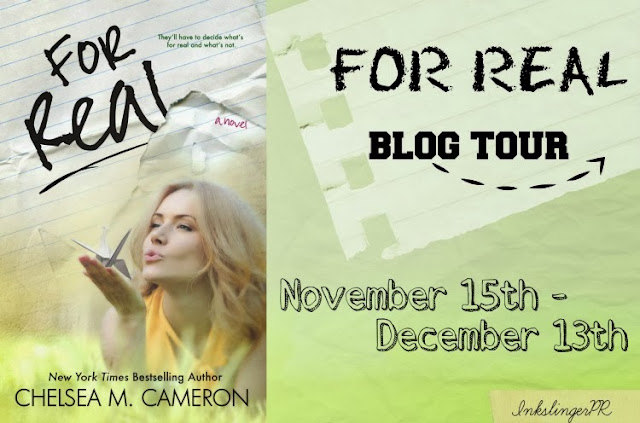 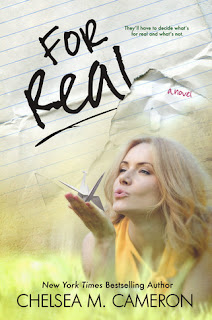 Buy on Barnes and Noble


Two people. One fake relationship. What could go wrong?

I loved the sound of the novel, from the synopsis it appears cute, sexy and totally romantic - which it completely is.

Shannon Travers is twenty-one and still a virgin, a fact that doesn't really bother her much but that her friends obsess over - Shannon has just never met a guy she really seemed to click with.

One night her friends push her too far, and to finally get them off of her back about it, she makes a deal with Jett, a guy covered in tattoos who doesn't conform to the rules - especially the ones Shannon sets out for their fake relationship.
Both are happy playing at their fake relationship which they agree will end after a month, but what happens if things start to feel real, for the first time ever, as their fake relationship's deadline draws nearer...?

Shannon does seem a little cold and quite the control freak at the beginning of For Real, however this sense soon dissipates as we get to see more of her character and learn the way she think and see how she handles situations. Her character is cautious, but still open to new things, she's smart, a little snarky and very determined.

Jett, at first, seems like he might be a nicer version of the typical tattooed bad boy with a mow-hawk to complete the look, however he is an amazing example of how looks can be deceiving - he's sweet, chivalrous and unique. Some  of the ways Jett behaves and the things he does are so completely adorable.

I actually LOVED how Shannon and Jett fell into their fake relationship and accepted each other so much, the rules and some of the things they do to make their relationship appear authentic are absolutely hilarious.

Shannon's friends really didn't look out for her and the way they treated her was deplorable at times, I really liked how Chelsea got her characters to confront this, showing readers that this kind of behaviour is not acceptable and should not be put up with.
Javi was one of my favourite characters, he knew what was right and wrong, he listened to people and did what he could to help.

For Real explores different family and friendship situations - some incredibly unconventional, but all intriguing and adding to the story, explaining and, at least somewhat, justifying why some characters behave the way they do.

I recommend this novel for anyone who likes a light, easy and gorgeously romantic read - it embodies all of this, while also keeping original and dealing with different hurdles in a way that isn't too over the top dramatic.

Such a cute and adorable read, totally swoony and sweet read, For Real left a smile on my face and I am so looking forward to book two in this series.


I rate For Real Four and a Half out of Five!!!

Chelsea M. Cameron is a YA/NA New York Times/USA Today Best Selling author from Maine. Lover of things random and ridiculous, Jane Austen/Charlotte and Emily Bronte Fangirl, red velvet cake enthusiast, obsessive tea drinker, vegetarian, former cheerleader and world's worst video gamer. When not writing, she enjoys watching infomercials, singing in the car and tweeting (this one time, she was tweeted by Neil Gaiman). She has a degree in journalism from the University of Maine, Orono that she promptly abandoned to write about the people in her own head. More often than not, these people turn out to be just as weird as she is.

Her Young Adult books include Nocturnal, Nightmare and Neither, the first three books in The Noctalis Chronicles. The fourth and final book, Neverend will be out in 2013. Whisper, the first in The Whisper Trilogy is also available, with the second book in the series, Silence and the final book, LIsten coming out in 2014.