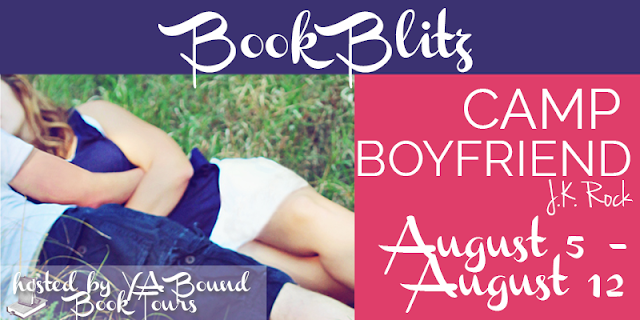 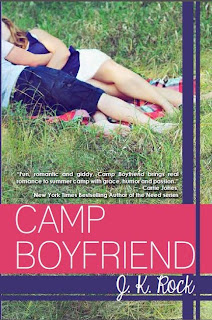 Summary from Goodreads:
The summer of her dreams is about to get a reality check.


They said it couldn't be done, but geeky sophomore Lauren Carlson transformed herself into a popular girl after moving to a new school halfway across the country. Amazing what losing her braces and going out for cheerleading will do. Only trouble is, the popular crowd is wearing on Lauren's nerves and she can't wait to return to summer camp where she's valued for her brain instead of her handsprings. She misses her old friends and most of all, her long time camp-only boyfriend, Seth. This year she intends to upgrade their relationship to year-round status once she's broken up with her new, jock boyfriend, Matt. He doesn't even begin to know the real her, a girl fascinated by the night sky who dreams of discovering new planets and galaxies.
But Matt isn't giving her up without a fight. As he makes his case to stay together, Lauren begins to realize his feelings run deeper than she ever would have guessed. What if the guy she thought she was meant to be with forever isn't really The One? Returning to Camp Juniper Point was supposed to ground her uprooted life, but she's more adrift than ever. Everything feels different and soon Lauren's friends are turning on her and both guys question what she really wants. As summer tensions escalate, Lauren wonders if she's changed more than she thought. Will her first big discovery be herself?

“Can I ask you a question?” I’d been dying to ask him this for years, but the old me had been too afraid.
“Shoot.” He wrapped his arms around his knees and locked a hand around his other wrist.
I gathered my courage. “Why did you want to break up every year after camp?”
In the quiet that followed, I traced the white stitching on the embroidery that outlined Madison’s initial.
When Seth finally answered, his voice was low.
“It’s easier to end things on good terms than risk something going wrong during the school year.”
“Why assume the worst?” I’d never given him reason to doubt me.
“I saw what my dad went through after my mom left us.” He reached for a stick to shove the logs around in the dusty fireplace as I marveled that he’d finally admitted what I’d suspected.  When Seth’s mom abandoned him, she’d left a huge hole. No wonder he had trust issues. Still, we could have worked through that if he’d given me a chance. Opened up to me like this before.
“I always figured I’d wait to get serious with anyone until I was… really sure,” he continued.
“And you were never sure of me?”
His crooked grin made a surprise appearance, but his tone was dry. “I was hoping this would be the year we’d be ready to take that step.”
Something inside me collapsed. My chest felt so tight that for a minute I couldn’t breathe. We’d been so close to developing something amazing.
“Instead, I showed up with someone else.”
Outside, the wind rubbed tree limbs against the cabin, making a squeaking scrape.
“It wasn’t just that.” He put the stick down and looked at me. Really looked me. “You showed up as someone else. Someone I didn’t recognize with a new look, clothes, interests.”
I opened my mouth to protest but stayed silent when I followed his gaze to my trendy sneakers.
“I didn’t know who you were anymore,” Seth went on. “Since when did you prefer dancing to stargazing, tanning to pursuing your Aerospace Scholar dreams? That wasn’t the Lauren I knew. Loved.”
I flinched. Who knew a verb tense could cut as deep as a knife? Seth no longer loved me because I’d changed.
How ironic that I’d come back to camp to get back to the things I’d loved, especially Seth. But Matt had stopped that chance and, suddenly, I was glad he had. What was so wrong with liking dance and astronomy? Cheering and the science club? The popular and the outsider cliques? The problem was, I hadn’t realized I could do both, be both. If I’d gone back to Seth, I would never have learned that.
I looked over at my drying wedge sandals by the fireplace. They were awesome, even if they had slowed us down. And yeah, I was the girl who worried about weather-induced hair frizz.
So maybe I had changed. And Seth had a point about letting my dreams lapse. But why couldn’t he see through the make-up and clothes to the person who still thrilled at the site of a meteor shower and drew constellations on her notebook covers?
I laid back, tired of justifying myself. “That girl’s gone, Seth. I’m different now.”
Seth stretched beside me. His amber eyes searched mine in the shadows between us, a wistful smile lifting the corners of his mouth.
“It’s not a bad thing,” he agreed, his fingers toying with my curls. “I just miss the old you sometimes.”
I closed my eyes and enjoyed his touch, knowing it wasn’t going any further. After all, he cared about someone else, someone I’d never be again.
“Sometimes…” I edged a little closer to ease the empty ache inside. “…so do I.” 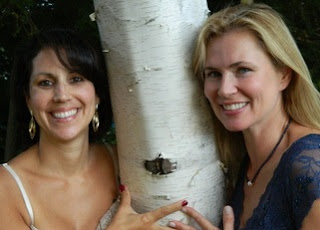 Together, they dream up Young Adult books like CAMP BOYFRIEND, the first in a three-book series.

The summer camp stories continue with CAMP PAYBACK (4/14) and CAMP FORGET-ME-NOT (8/14), plus bonus free novellas in between stories. Visit http://campboyfriend.net to learn more about the series and the free prequel novella, CAMP KISS, which you can download here. 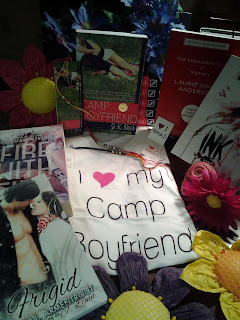